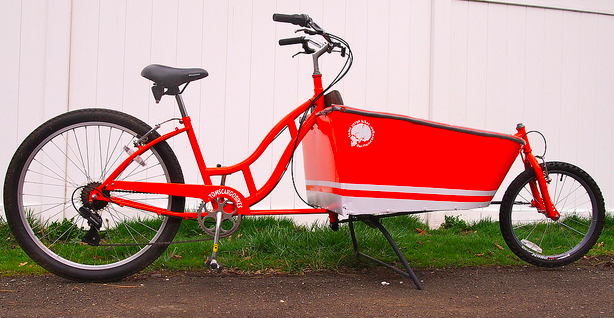 Today at the Chicago Bike Swap one of us met Tom Labonty, a cargo bike builder from Portland, Oregon, who was in town to personally deliver a Creamsicle bike (which I think is the one in this picture cribbed shamelessly off his website). He and the new owner told me about the bike, which Amtrak had unfortunately delayed, made from most of a women's 26 inch frame and the front parts of a child's 20 inch bike. He uses sheet metal for some of the boxes he makes; I think this is one of them.  They are all different.  Unfortunately, since the bike was stuck in Amtrakland I was unable to ride it around, but I was told its handling was as good as some of the other cargo bikes that were shown at the Bike Swap.

Looking at the pictures, it seems to be a cruiser frame in back with a mountain bike derailer on it, making for maybe 7 or 8 gears, a similar choice to the back of our Haley trike. There are no fenders or lights or back rack, and the chainguard is partial, but all those features can easily be added, changed, customized, or put off til later. The box and the kickstand look to be well thought out and durable from the pictures.

He builds each bike according to what is available or what the customer is looking for - look at his website to see some of the amazing creations he has put together, including cargo bikes, themed bikes, advertising or promotional bikes, and the occasional bike shaped sign. In our brief conversation he repeated what his website points out — that these are simple bikes that inexpensively do what they need to — but he clearly takes a craftsman's pride in making everything himself and not outsourcing a mass produced model to someone else. And it looks like customers are able to provide their own favorite bikes to build from, so if the derailer gears or something else bother you on this bike, you could order one made from an internal hub donor bike or ask for a different geometry as you wish. He noted that all his bikes ride slightly differently, but he has a good understanding now of how to bend the steering linkage and plan the angles so the bikes don't steer badly when they're finished.

In the world of cargo bikes there are very fancy rides, custom made without many compromises by small manufacturers, pricy but mass-produced utilitarian indestructible Dutch models, inexpensive Asian imports, and there is a niche for inexpensive, custom US-made bikes like these. It is easy to talk to Tom about his bikes and you might find just what you are looking for, especially if you have a special idea in mind. I enjoyed meeting him, hope he has a great visit to Chicago, and if I'm lucky I'll run into the new owner again for a spin on the bike itself.

Labels: Checking out other people's bikes