The Raleigh RSW16 (Raleigh Small Wheel), made 1965 - 1974, preceded the better-known Raleigh Twenty (our post about it) by half a decade. It was an attempt to get in on the popularity of the original 1962 Moulton small wheel bike. There is a long interesting story about the end of Raleigh by Tony Hadland in books and on his blog, and on the Retro Raleighs section of Sheldon Brown's site. After a year of building the RSW16 as a fixed frame, a folding version, the Compact, was developed so that cyclists could carry their bikes in the back of their little British 1960s car. There was also a 14 inch version, the RSW14. Both of these little bikes will work for any rider from about 9 years or 4½ feet / 135cm tall, up to perhaps 6 feet / 180 cm.

Our RSW16 Compact is from 1966 and was sold in Washington DC according to the dealer's sticker.  They originally came with cream colored Dunlop 16 x 2 inch tires which had very supple sidewalls, in an attempt to make up for the lack of the Moulton's full suspension system. You can see these on Sheldon Brown's bike. Dunlop is long out of the bike tire business but 16 inch BMX tires still fit. We found some Maxxis Hookworms. They ride more stiffly and a little less fashionably than the originals, most likely, but they are available.

It also originally came with a white vinyl Brooks mattress seat, famous for ripping apart at the seam, and that's probably what happened to the one on this bike.  Even the (ugly) seat it has now is probably at least as good. 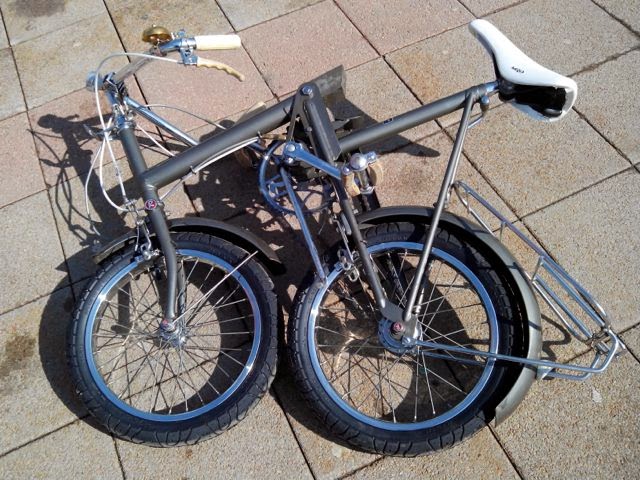 Is it really smaller folded 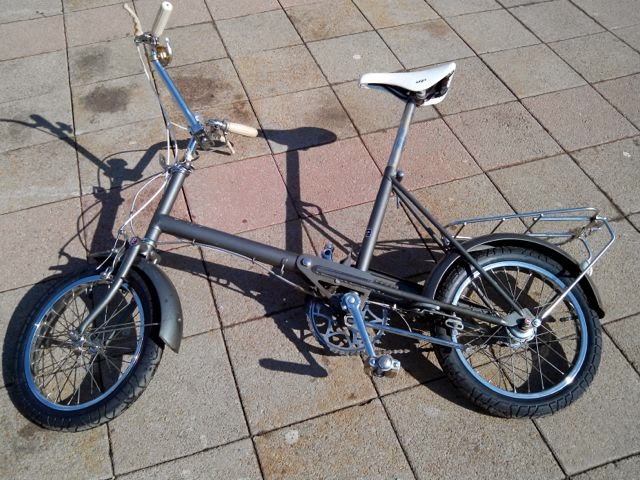 than it is unfolded?

The folding system, described by Raleigh as being 'like a shotgun', involves pushing that flap just above the bottom bracket against the seat tube and lifting the seat while pushing the handlebars down. It clicks closed.  There's a photo of the warning decal below.

The handlebars also need to be folded down and the seat lowered as much as possible. The cream colored reflectorless pedals don't fold and the whole package flops around when carried, but I guess it fits in the car better. 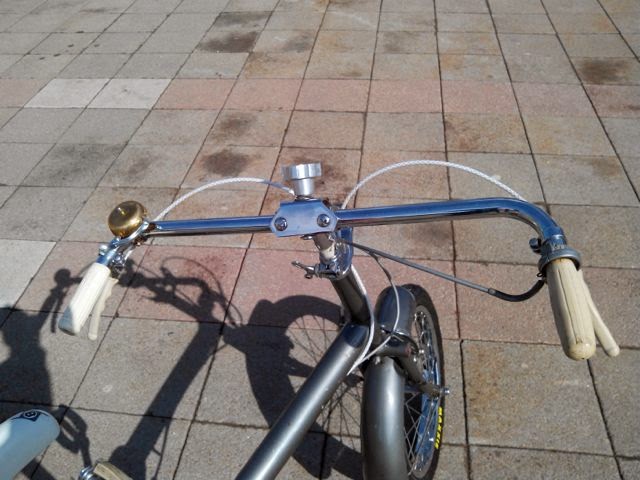 The handlebars can be folded (utterly uselessly) into an intermediate straight bar position that looks wonderful for smaller riders until you actually try it. 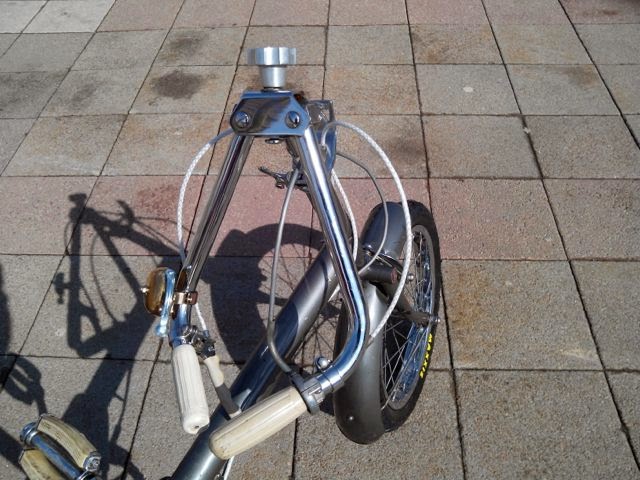 Another step downward and the handlebars look like this. Undo the quick release seat tube lever and you're ready to fold the frame and pop it into the boot of your Morris Minor.


These are actually not terrible little bikes. There is a Sturmey-Archer AW 3 speed hub without a coaster brake, shifted with a then-newly developed handle grip twist shift (before the Shimano 333 grip that's on the left side?) and the brakes are surprisingly good for a Raleigh. 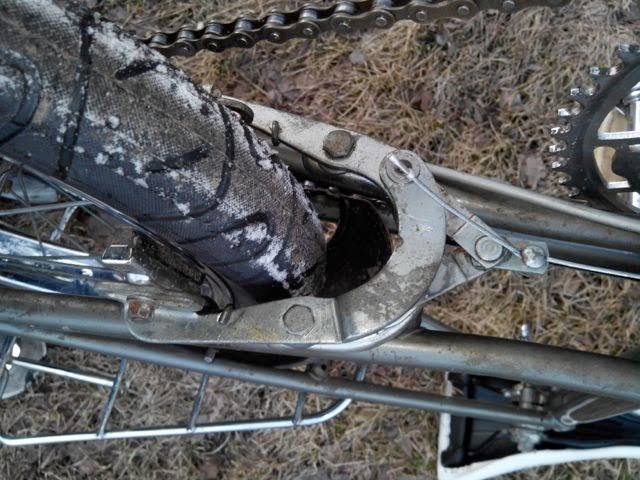 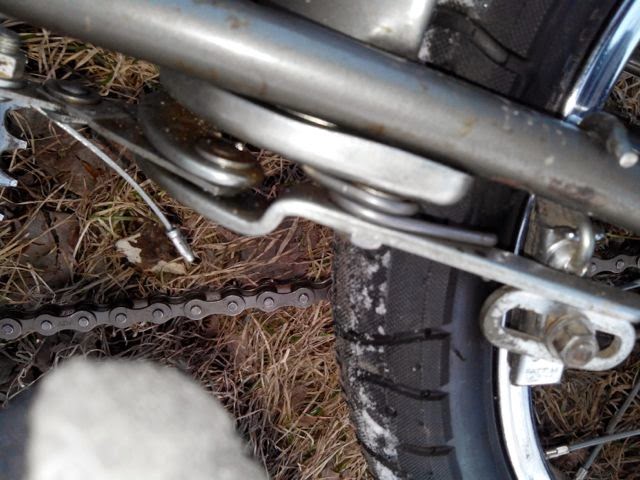 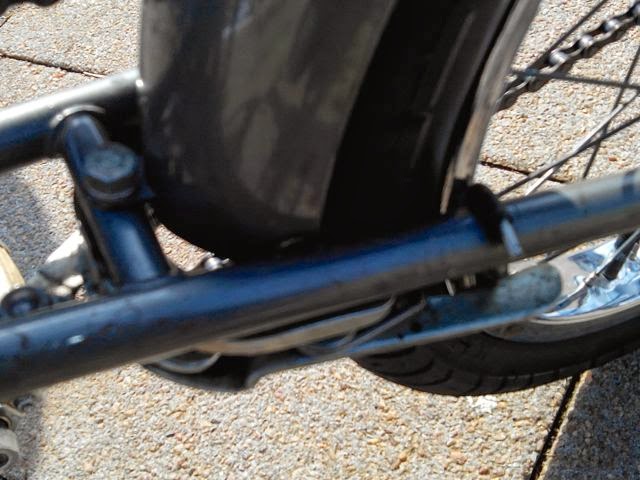 The front brake is pretty standard Raleigh. But despite the steel rims and the plain rubber pads, the rear brake really works well. It has a design that looks like a 1980s mountain bike brake, behind the bottom bracket, and the crossed levers amplify the braking. 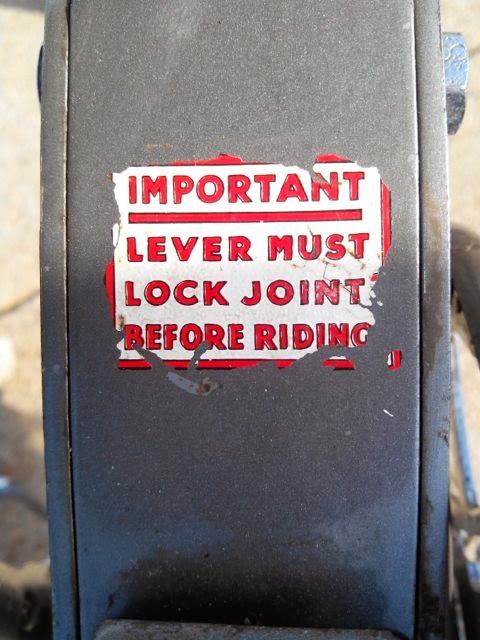 That huge oddly shaped rear rack was intended for a bag made of plaid or white vinyl around a lightweight plywood frame. The bag clamped between one of the wires at the front of the rack and a spring-loaded wire in the back. The sprung section still pulls out on ours (often this is rusted shut on others) but without the special bag it's not a very useful rack. We will probably try to fit angled steel brackets onto a milk crate or similar to take advantage of the connection system. The rack doesn't hold panniers very well at all.

To be safe for riding nowadays this bike still needs better visibility. There are neither pedal, wheel nor front reflectors and there is no lighting. A bell has been added and the rest will have to follow. We'll likely swap out the ugly new seat for an ugly old one, too.

I enjoyed riding my son's RSW16 Compact with its zippy small wheel maneuverability, though it is rather heavy and unwieldy to carry. It's got a real 1960s design feeling that may be the best part of the whole bike. Though it's fun enough for an adult, our 9 year old spent the morning zipping around on  the RSW and says "it's great!" What more do I need to tell you?
at 5:35 PM 1 comment: