Street riding with younger riders either on, in, or alongside a bike has many complications in Chicago. One of the most unpredictable yet frequent hazards is dooring. This is what happens when you or your child are riding along minding your own business and suddenly a car door flies open right in front of you, illegally opened by someone who didn't look first. The bike hits the door, you can sail over, and a lot of unnecessary damage is done.

Though it seems easy to stay out of the "door zone" to single riders, it's harder when you are responsible for a group of people of different sizes. Often the streets in Chicago are pockmarked with potholes, ruts, and work being done at the edges. These obstacles force us all as cyclists to move much closer to parked cars than we wish to ride. Also, staying far from where a door might hit you can be tricky when cars, or buses in particular, crowd riders into the edges of the lane and right into the door zone. Most safety guides recommend riding on the traffic side of a bike lane because of this.

Specifically teaching young street riders about dooring is essential to safe riding and the development of lifelong cycling skills in any American city right now. We teach our kids and kids on our bike trains about dooring from two perspectives: awareness of the mechanics of being doored, and the good riding skills that can lower chances of being doored. 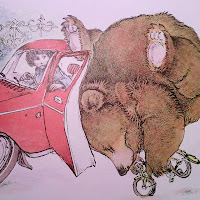 Our beloved book The Bear's Bicycle is our first step. When our kids were small we read the book and paid close attention to the page where the bear plows himself into an open car door. Sounds silly and the picture is funny but it is a great first step for balance bikers to begin thinking about doors. The bear is actually in the awful position, squashed by the door toward the traffic lane, that most riders are in when a door impacts a bike. Good to know. We look at it with our older kids too. Get a copy for yourself.

The second step is to take the kids out on their bikes on our street during the quietest time of the day and open our own parked car doors to measure how far away from a car its doors will typically swing out. Two-door models are worst since the doors are longer. Truck doors are up high. Kids notice right away that the door zone is coincidentally just in the usual place where they ride to avoid traffic.

Showing children that they are less visible can reinforce to them that they need to be proactive with their own skills to ride as safely as possible on the street. We invite the kids to get in the car and try to see their brother "riding" behind them in the rear or side mirror.


Now that they understand what the hazards actually are, we move on to ways to avoid them.


Skills to enhance safety from dooring, for kids and grownups who carry them

We practice riding a few feet out into the street, far enough not to be hit by opening doors. This is further into the main travel lane and closer to the moving traffic, which might be uncomfortable, but it's probably safer.

We try to keep kids on their own bikes just in front of a grownup and a little to the right, so we can keep up the safe riding patter: "hey, that red car just pulled in, do you think the driver is going to get out?" "Ease on back to your left, OK? - you're in the door zone..."
We practice getting on our bikes on our own very quiet street and nearby university campuses and parks to test out ways to stay out of the door zone. Single file, traffic side of lane, etc.

Next, especially on our early morning rides and bike trains, we remind the kids that morning is a time when many people are sitting in their cars listening to the radio or drinking coffee. It's amazing how many people are just sitting in their cars. These people often open their doors without thinking. We practice looking ahead while riding to anticipate opening doors. We try to notice if a car has its lights on or just shut them off, if it has exhaust coming out, if the windows are steamed up or open at all, if a reflection of the driver's face is visible in the side mirror, or if it is a time of day when people sit in cars on our usual routes. These cars have people in them and their door might open soon.

We try to choose routes with less car parking and quieter traffic. For us this includes using Fulton and Hubbard streets - the packing district - as there are few cars parked on these routes when we use them to commute from school in the afternoons. The truck drivers there can typically see our kids better than the usual SUV or minivan driver on residential routes.

We try to ride a little slower ourselves, too, so if something surprising happens we have more reaction time to avoid it or brake. We try not to let cars "pace" us - hovering just behind and not passing. That would be the car that would hit you if you fell, and they distract you from the car door just ahead. Stop and let them by. We keep our brakes maintained well (especially the front ones that do nearly all the work). Sometimes we even move back onto the sidewalk with our kids, especially when a lane doesn't leave enough room to safely pass parked cars and avoid moving traffic at the same time. The kids' bikes have bright lights and we make sure they keep them on whenever they are riding, day or night, to improve their visibility.

Streets with lots of car lurkers demand extra awareness. For example, Wood is fairly quiet and is a direct route for us, but it has lots of people hanging in their cars in the morning.  The kids try to glance ahead to scan for passengers in their cars to anticipate, ring their bells and move out of the door zone.

Bike Lanes
Lastly we teach that bike lanes — even those with colors or extra striping — do not encourage drivers to behave differently, and that kids must use their skills and smarts to ride as defensively as possible. Even the newest Chicago lanes don't adequately address the problem. Car doors next to the new Dearborn lane easily extend into the bike path, for example. There's no substitute for teaching kids to use their skills and protect themselves. It enhances their ability to take good care of themselves on their own bikes.

The bicycle lanes that are now being installed in Chicago don't completely ignore the issue, though. Several are located on the left of the one-way roads, like many in New York, because while every car contains a driver who sooner or later opens a door, not as many contain passengers. Bicyclists are therefore less likely to be doored while riding on the left.

And many new Chicago lanes have a small painted buffer between them and traffic or parked cars that can give you a little extra space if anybody sees them. The lanes built between the curb and parked cars also address this to some extent because if someone opened a door into the bike traffic lane the rider would be deflected onto the sidewalk, not into traffic. However, cars basically ignore paint and we teach our kids to ride with this in mind. Car permeable protected lanes - the only kind here in Chicago - are only partially protected.  We teach our kids to stay aware of this on these lanes too.

Future lanes could be designed to support safety from dooring for children and all other riders. The two types of vehicle should be well separated, with different paths and signal systems, with impenetrable barriers like concrete or steel to keep cars out of bike space. This has been the only workable solution for pedestrians for years - they get at least a curb. Although even curbs and traffic signals don't always keep cars off the sidewalks, they are a minimum place to start. Bikes should have the same safety as pedestrians. As an added benefit, separated lane systems give car drivers one fewer thing to worry about, too.

We are lucky in Chicago to have a support system for riders who get doored or are involved in a collision. There is an extremely helpful crash hotline run by Active Transportation Alliance at 312-869-HELP (4357), and several law offices in town specialize in bicycle related issues - call the hotline, or look on the Chainlink links page for some of them.
at 12:27 AM