Ask Not for Whom the Prolerizer Tolls 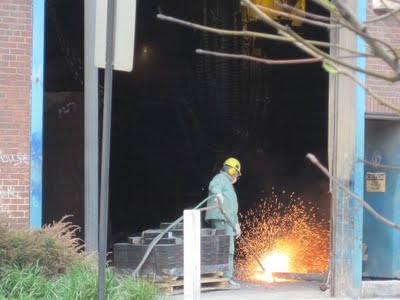 After we leave the big kids at school we often find ourselves pedaling east toward the lake and passing through the industrial strip that runs between Elston and Clybourn, where Finkl and Sons Steel pours huge glowing vats of metal into sparking cauldrons (and nearly runs us down with its Finklmobiles) and where a few other companies put the rubber on the road where it comes to recycling. 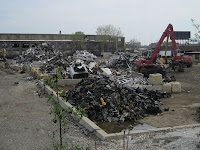 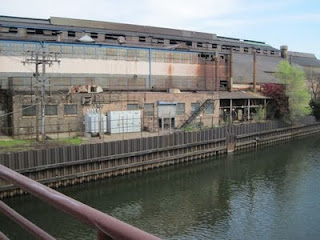 They don’t just collect cans and paper - they buy serious scrap metal and stack it in huge shiny rusty crumpled heaps on the west of the river to ship by barge, and on the east side General Iron, well... Have a look. 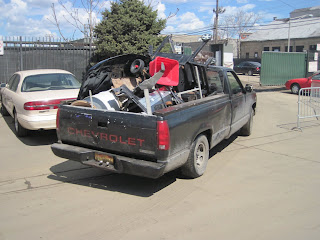 Every night and day in Chicago, hundreds of half broken down pickups and occasional vans take to the alleys looking for metal. They have plywood sheets teetering on the sides so they can carry more discarded appliances, bent ironing boards, crumpled car hoods, and other assorted scrap. Some have new backyard grills or metal patio furniture in there. And, of course, some carry bicycles. Maybe yours. Did you lock it to a stationary object? Did you use a good lock? Or did you just leave it in the garage with the old, bad lock on the door? The Prolerizer calls, and the metal guys obey. Your bike goes into the recycling pile, up the ramp to the grinder,  and the metal guy gets a couple bucks.

Although it eats bicycles, we love the Prolerizer and the parallel universe Chicago it represents. The kids and I can watch it for a long time, as its yellow helpers claw their way through stacks of metal shreds that look like James Bond’s car in Goldfinger. And bikes. 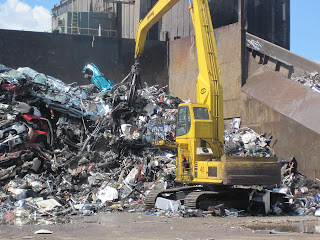 The cars, bikes, ironing boards and lawnmowers float up the slow conveyer ramp and topple into the Prolerizer’s mouth. There, I'm told they get ground up by spinning drums with hardened teeth, where magnets and eddy currents separate ferrous metals from aluminum from trash, and everything gets spit out as little pellets into heaps behind the machine. Some then goes, we assume, to Finkl to make giant forged axles and things. Some might be shipped by barge to Indiana or overseas.


The weigh station measures metal guy trucks coming in and going out and the Prolerizer’s henchmen hand over the cash before the metal guy heads out for more. The ground is covered with odd liquids dripping out of the backs of trucks, fluids that smell like machines and that will cover you if you slip. 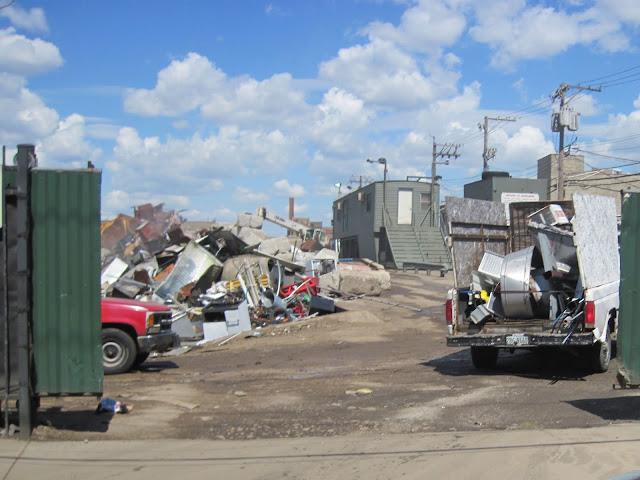 The metal men will take anything that isn’t locked down and some things that are. Our friend Mike was in his kitchen a couple of years ago and heard a big crunch in the backyard. He looked out just in time to see two metal guys throw his metal back gate (which until then had been perfectly fine and functional, keeping the dogs in the yard) into their truck and roaring off. A few days later the same metal guys started pulling the rest of the fence out of the ground and Mike had to chase them away. Now he has given up and he has a wooden fence.
On the plus side, if you live in Chicago and you have an old washing machine or tangle of rusty galvanized plumbing pipe that you don't want, you just put it in the alley and within an hour or so it magically disappears.


Every time one of these trucks cruises through our alley or goes by us on the road we check out the back. There is almost always a bike in there - usually a wreck, but often perfectly good looking with air in the tires. It Could Happen To You.


Steel and aluminum, unlike plastic and carbon fiber, are recyclable and usually get recycled. Your bent ironing board might come back in a year or two as a new Cr-Mo bike frame. But don’t let it go the other way. Use a good lock.
at 8:25 PM