Snow Days - and a ride to Northerly Island 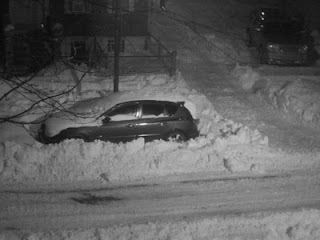 We have been home like most of Chicago these last two days burrowing into the snow mountains and drinking hot chocolate. One of us rode the Brompton to work this morning after walking out to a main road. The rest of us climbed in the snow and threw snow balls. The ride was good on the big streets but the smaller streets were a bike portage. Good thing the Brompton is so light.

We love the deep snow. According to CPS it's back to school tomorrow for one day before the weekend. Our school commute is all small streets except for Milwaukee so we may take the train and see how the streets are while the big guys are at school.

Northerly Island is on our list of rides for the weekend because of the FREE snow shoe and cross country ski rental. The island has many birds and animal tracks and amazing winter views of Lake Michigan. It was made a few years ago when Mayor Daley ordered up a convoy of bulldozers in the middle of the night to tear up the private airport that he had wished for some time to turn into a park. He cited a risk after 9/11 of small planes in the city airspace and sent the dozers out without warning. It's a perfect place to land now only if you are a bird - it's a bird sanctuary and park (and concert venue - hope those birds like Fall Out Boy). It tends to be pretty windy since it's flat, low and right next to the lake, so dress warmly and bring something to protect your eyes and face from the cold blowing snow.

We live fairly close on the Near West Side. We either go west on Harrison through Printer's Row and zig-zag to Grant Park or take the sidewalk up Roosevelt and the pedestrian tunnels straight to the Museum Campus.

Northerly Island has FREE snow shoes and cross-country skis for the whole family on Saturdays and Sundays when there is more than three inches of snow. There are snow shoes for the smallest children on up to adults. I'd say they will probably be open this week.

Ride as if to the Shedd Aquarium and continue toward the Adler Planetarium, but before you get there turn right toward the concert theatre. A big sign says no parking ahead but it isn't true, and you don't care anyway if you're on a bike! Continue on a bike or with a car past the concert area to the modern style airport hall near the end of the road, and bring your bike inside or park for free on either side. The old terminal building is open and the skis and snow shoes are inside.

It is warm and dry for when you get tired and sometimes there is even hot chocolate, though we usually bring a thermos of our own. There is a soda machine but no food vending so we pack snacks from home. Playing in the snow usually makes everyone pretty hungry. There are nice bathrooms in the airport terminal too.

You don't have to ski or snowshoe if you'd rather do something else - you can just wander around and play. Last time we were there they were lending out snow block molds for making igloos as well. Happy Winter.
at 11:28 PM