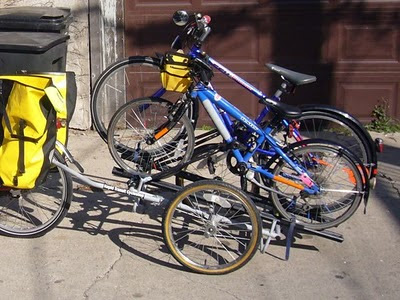 One of the problems with using the box bike to get everywhere in the city is that the kids, who of course are getting bigger all the time, want to ride their own bikes sometimes, too. Not a problem, really, but if we want to ride somewhere nice but far away, especially if we are trying to get there quickly, sometimes the kids are out of luck.


Well, that's just unfair, we've heard. And it is.

We decided to figure out a way to carry big kids' (well, up to 24 inch wheeled) bikes with us, so we can race off somewhere, then detach the kids' bikes and let them ride around where it's nice (like Kidical Mass, for example), and if they get tired they can get back in the sag wagon cargo bike and their bike goes back into the box.


But there's no box for bikes - it's full of kids - so we built a trailer. An old fluorescent yellow and pink colored child carrying bike trailer with no cover was $10 at the Maxwell Street flea market (you can see it in its glory on the balance bike post). I've seen many, many more of this kind of inexpensive trailer in thrift stores, flea markets, and even in heaps of metal recycling. 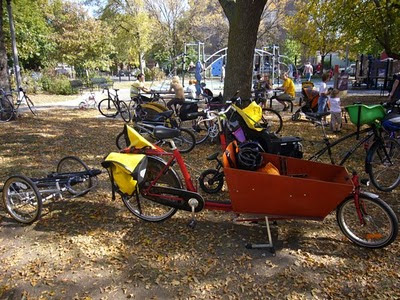 We found some automotive roof rack attachments for bikes at Working Bikes for, as I recall, $30 for 3. They are the ones where you don't have to take off the front wheel to attach the bike, with a swiveling clamp arm that attaches to the down tube and scratches the paint.

Then I stripped down the trailer to its bare gray steel bones, reattached the wheels and took off the big curved supports for the top, and attached the bike carriers to the trailer bars as if the trailer were the rack on top of a car. They needed some adjusting to fit well, but I didn't even have to drill anything.

You'd think that would be it, wouldn't you? But it isn't. The trailer rides high in the front and low in the back, so it takes a lot of adjusting when it's built to make sure the bikes you plan to use aren't scraping on the ground in the back. And if the kids' bikes extend too far forward, their front wheels can get caught in the back wheel of the towing bike as it goes around a curve. This can be rather surprising.

I could just barely get the adjustment right when I did it last year, but now that I've started carrying (or trying to) larger 24 inch wheeled bikes it isn't working again. I have to attach it to the pannier rack to get it back far enough for the 24 inch wheels. But a little work I did today should keep it going for another year or two of growing. Thanks to the many people I talked to about this. 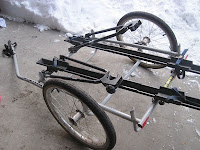 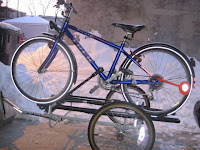 By taking off the bolts holding the wheel assembly onto the trailer frame and drilling new holes at the very back, I moved the entire wheel back a foot or so, thus lifting up the back, lowering the front, and changing the center of gravity of the kids' bikes so they ride more happily and don't bounce as much. 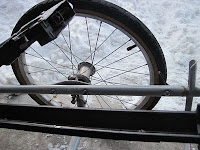 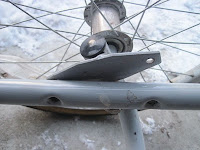 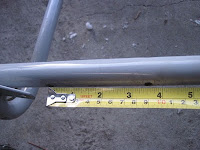 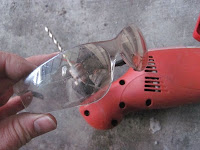 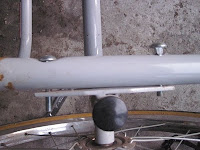 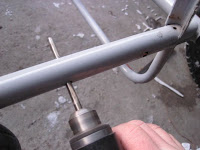 
I might try to lengthen the towing bar that attaches to the bike, and I should certainly try to find a better attachment clamp method than the one that came on the nasty trailer frame, so I don't scratch up the rear triangle on the box bike any more than it already is. Maybe I'll attach a bit of pressure air hose with connectors to the two sides, like Bike Friday trailers do.

Now if I can only think of a good way to hang panniers from a rod or something along the sides of the trailer without having to weld anything... 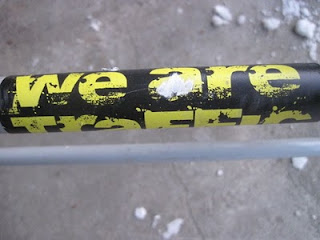 It's surprising that no commercial product is out there to perform this function. If you are a bike or trailer builder, think of the possibilities. There are a lot of kid-carrying options out there, and this kind of trailer could fit most of them. Maybe integrate a little lockable metal box for tools, a chain, and a pump?
at 5:55 PM