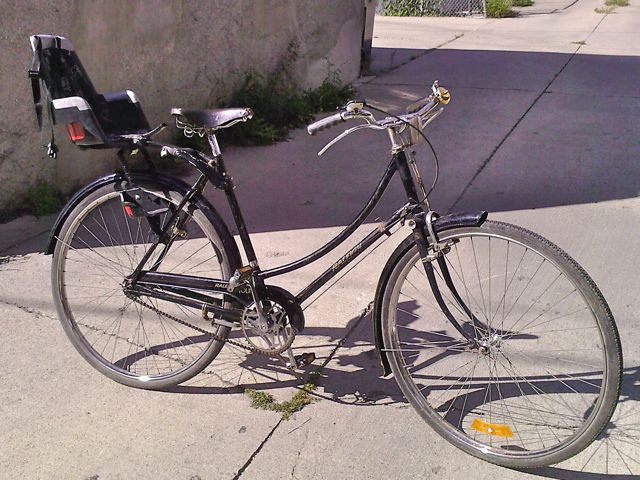 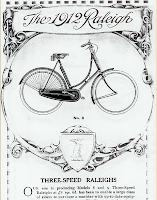 This is a Raleigh DL-1L ladies loop frame Tourist roadster. This one is only about 30 years old, from 1981, one of the last years they were made, but the design is nearly unchanged from the bikes of the early 1900s. These bikes were built as durable, reliable daily transportation in a world of unpaved roads, horses and carriages. When Raleigh started making them, the Wright Brothers were still building bicycles. It’s ideal for bringing out your inner Miss Gulch (though in The Wizard Of Oz I guess she actually rode a different, similar bike, according to the Internet).

The “heavy roadster” design is different than most modern bikes in that it uses huge 28 inch wheels and rod and stirrup brakes. (Sheldon Brown has more information and so does a DL-1 blog.) The rim size, 635mm/28 in, is over an inch wider in diameter than 700c/29er/622mm and also a bit larger than 27 in/630mm, and the “Westwood” rims themselves don’t have braking areas on the sides. Instead, the brakes push out against the underside of the wheel itself, actuated by a series of metal rods and levers instead of the usual cable.  Here are a couple of images: 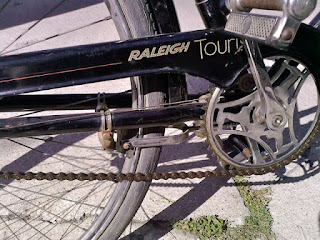 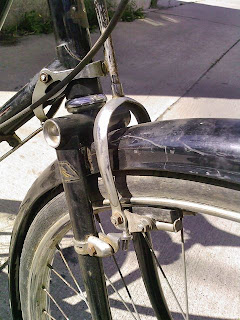 The levers are brazed directly to the handlebars. 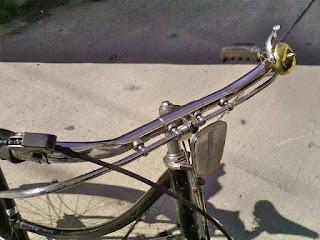 There is a wonderful 17 minute video from the British Council of How A Bicycle Is Made that is well worth watching. It shows production of these roadsters in Nottingham in 1945. Our kids’ favorite part is the guy who dips the frames in a vat of black enamel with his bare hands. Presumably the bike in this post was made on the same machinery.

Bikes of this basic design, I read somewhere, account for half the bicycles ever made, and if you ever look at the streets in Asia or Africa you’re bound to find plenty of them. Raleigh even built them there: “A new plant in Boston, USA began making bikes in 1948; the Sen-Raleigh factory in Asansol, India opened in 1949. Further factories opened in South Africa (1950), Canada (1955), West Germany (1957), Malaysia (1966) and Kano, Nigeria in the early 70s.” What is left of Raleigh still sells them abroad. Roadsters, some with rod brakes, are still popular around the world: made for example in England (Pashley Princess series), or Holland (Azor (PDF), Gazelle, Batavus) where ones like this are called Omafiets (“granny bikes”). They’re also made in India (Hero Jet Lady, Avon AB310 Lady), and in China (Flying Pigeon PB-13). 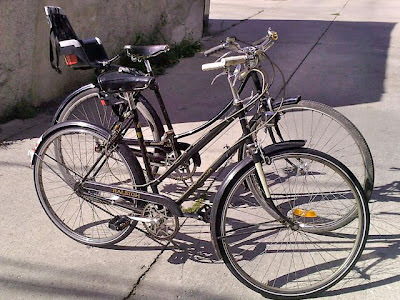 Compared to a more common Raleigh ladies Sports (DL-22L) “light roadster” like the 1965 model in the pictures, the DL-1 feels like a grownup bike. It must be 20% larger than the Sports, and the front wheel is placed far in front of the handlebars. Similar to the Sports, the bars on the Tourist themselves are at about knee height as you ride, but close to the seat, giving you a very upright riding position without the ‘sit up and beg’ feeling of a higher stem bike. Both bikes feature a 3-speed Sturmey-Archer AW hub and have similarly limited braking power.

The Tourist cruises surprisingly well in flat Chicago. After a moment overcoming inertia it moves like it is rolling downhill. The agility is less impressive, probably because of the giant tires, but this is a machine that clearly could get you places in a hurry. With the huge wheels and the long wheelbase it easily rolls over potholes and irregular pavement without skittering around. The gearing is a bit high if you live near a hill, but we don’t, so it’s no problem. The brakes are surprisingly good in dry weather but clearly they need more adjustment and care than modern ones.

(edit 4/13: we got some Kool-Stop replacement rod brake pads in salmon colored compound from Blue City Cycles and it stops really well now. The dry old pads were the main problem with the brakes.)

The bike seems like it could carry a ton of cargo, and we were able to easily attach our old Bobike Maxi child seat to it, but you should check that racks and accessories don’t hang at odd angles because of the large wheels.

If you want to soup one of these up to ride with kids, clearly the rack and child seat are good ideas. If the brakes aren’t adequate some people convert the rear wheel to a coaster brake hub, which works in the wet but only on the rear wheel. The rod and stirrup brakes are hard to convert, though some modern Dutch bikes use rods to actuate hub drum brakes.

The writer of Lovely Bicycle, ‘Velouria’, seems to have a collection of these DL-1L roadsters and a lot of useful links, so here is an image shamelessly copied from her blog that links there: 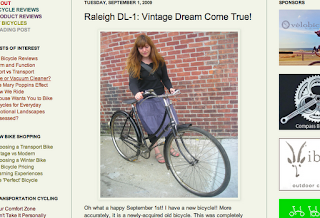 9/13/12: Something odd happened when I was trying to add a photo to the original version of this post and the whole thing vanished, somehow.  Poof! Oops.
at 4:19 PM