Open Streets Was Really Fun - Did You Go Too? 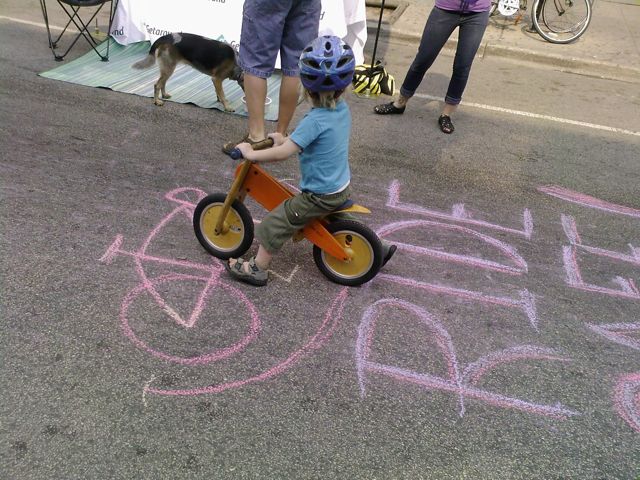 Went to today's Open Streets on Milwaukee Avenue, and it was really enjoyable. Two of the kids took their bikes and zoomed around mostly safely, there was a lot to do and see, and many many other people (and dogs) were there enjoying the perfect sunny weather and the relaxed atmosphere that comes with not having to think about cars. A couple of pictures came out:

Today's festival was a nice complement to the Open Streets that have occurred downtown in the Loop. This one on Milwaukee Ave was great for riding a distance without thinking about traffic much. The events down in the Loop have concentrated on using the street for many different activities at once so they weren't as bicycle oriented. Instead they demonstrated the scale of the Loop buildings in a pedestrian environment and brought fun activities to the middle of the road in the commercial heart of the city.

Open Streets on Milwaukee Ave also offered many fun activities in the middle of the road - fencing demonstrations, Bhangra dancing, blue foam things, skateboarding, four square, chalk drawing...   These planned activities were expanded by the businesses along the route that joined in, putting furniture on the street or sidewalk for example, and made the festival even more fun.

It had a real neighborhood feeling, more so than the Loop events which celebrate Chicago's public face. It felt accessible. Three families we know who never go to street activities found themselves there, riding bikes or scooters and joining in and having a fantastic time. I think they'll be back. One hallmark of Chicago is the individual feeling of each separate neighborhood, and this event reflected the best of Wicker Park / Bucktown. The same event in a different neighborhood would be completely different. What could this kind of event be like in Pilsen or Devon Avenue or Bronzeville?

Some smaller members of our group would have enjoyed even more space for balance biking crazily back and forth without getting in anyone's way. Open Streets did address this issue somewhat - they put the REI demonstrations in the Aldi parking lot, which freed space in the street. This could serve as a good model for more activities in the future. This has been the approach used by NYC's Summer Streets, which took most activities off the main avenue and used smaller side streets instead. On the other hand, the advantage of the approach today on Milwaukee Ave was that it slowed traffic enough in several places that the spandex "on your left" riders spent the day somewhere else, leaving the strollers and balance bikers in peace.

It's really exciting that Active Transportation and the many Open Streets volunteers did such a good job planning and carrying out this nifty event today. Good work!

We also got to one of the Summer Streets festivals in New York this summer, and just found some pictures:


A Streetfilms video about the Ciclovía in Bogotá, Colombia is below (higher quality here). They have been doing Ciclovía (Cycleway) there since at least 1985 when I lived there, and it's the model for Summer Streets, Open Streets, the events in Paris, and around the world. If Bogotá can do it, why not every city? What's more, Bogotá is the model for bus rapid transit (BRT) coming soon to Chicago. More about that later? Streetfilms has something about that too I think. Meanwhile, this video is worth a view!