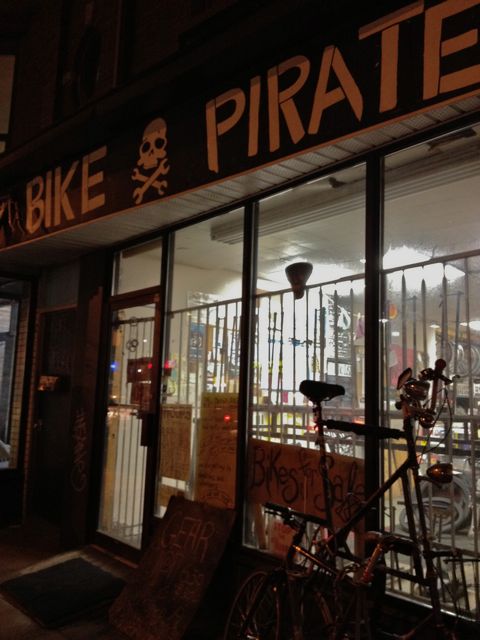 In the middle of the night last week, we were cruising the straits of Toronto looking for a place to moor for our 3 year old to use the head (or is it the poop deck?), when out of the smoke and haze rode the Bike Pirates and their tall bikes! Avast! (uh, ahoy!?)

Though they were just closing up from a women/trans bike repair workshop, they let us in and everyone ran wild for a bit...   Harrr! 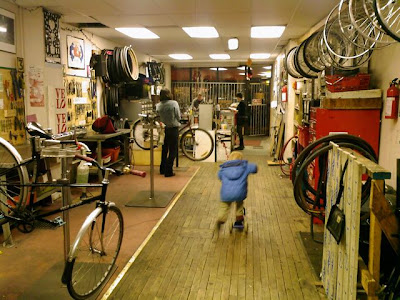 They have a lot of programs teaching bike repair, they occasionally sell repaired cycles, they have pot luck dinners, and have even put out a largely vegetarian Bike Pirate Cookbook (with another one on the way soon that you will need). There may be buried treasure in those bins labeled 'hubs' or 'stems.'  Mostly, they have this incredible workspace available to all, and programs you can read about on their website. There are a few other community bike resources in Toronto, too: Wenches with Wrenches and Community Bicycle Network are two that we heard about. But the Bike Pirates must be the swaggeriest.

Our Young Jims left with heavy hearts, smitten as we all are with the Pirates. Our disappointment only assuaged by the chests of treasure and swag and stickers amply supplied by the same.

There was cool washroom art:

And a big blackboard wall:

So here's a big Chicago Arrrrrr!

And if you ever be in Toronto, matie, bring a ration o' rum t' Bloor Street for the Bike Pirates!
at 11:22 PM