For the past couple of years we have been riding with studded winter tires on our big child carrying bikes. The tires seem to be as much a topic of conversation as the bikes themselves sometimes, so we thought we'd share our experiences so far. Clearly, this winter has so far not been the worst ever in Chicago (temperatures between 30 and 60 F or 0 and 15 C roughly, and not much snow or rain), but we still have had a bit of ice on the roads and about a week of normal winter ice and slush. Maybe this information will be handier later in the season or next year... 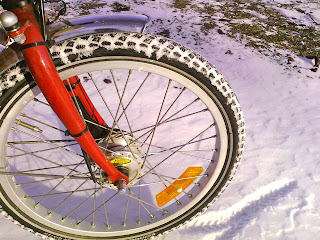 First off, studs are little points of metal poking out of the tire which are intended to get a better grip on slippery surfaces, much like ice crampons for hiking or studded snow tires for automobiles. They come on tires with various designs for various uses. Just as there are narrow treadless tubular racing tires and off-road knobby mountain bike tires, each for different purposes, snow tires also vary. Most are knobby and 'aggressively' treaded for off road use but others are more like a tire for an old 3-speed, with only a little bit of tread. The first kind is not very popular among regular riders we know since the aggressive tread is noisy and slows you down. Ours are the second variety, like a slightly knobby all purpose tire with lots of metal bits sticking out. They are Schwalbe Marathon Winters. Another similar one is the Nokian A10. We chose the Marathon because of our good experience with their other tires and because they are available in a 20 inch size. Most aren't, and if you need anything other than 26 inch or 700c/29er it can be hard or impossible to find studded options.

We rode for years with regular tires without much difficulty, but occasionally a quick slide on black ice would surprise us, so we decided to spring for studded tires before last year. We kept them all winter long, from late fall to mid spring, to cut down on the risk of sliding on ice as we ride in busy traffic in a city with mostly painted lanes up to now. The people who suggest putting them on only for bad days and using other tires other days have never removed and reinstalled a wheel on a cargo bike.

They give an extra level of confidence in traffic. Even on a good day it can get colder or dark and puddles or slush can freeze into ice. We chose to put studded tires on both front and back since a skid of either tire on ice in traffic is unacceptable. I don't see much potential benefit from only one studded tire, and I haven't tried it. All in all, we are quite satisfied with their performance - they pretty much eliminate sliding on ice. You could ride your bike across an ice rink if the Zamboni guy would let you. They don't slide on pavement, either, but they offer no improvement over regular tires for slippery steel things like expansion joints, metal plates in the road, or train tracks. They don't affect steering. The ones we use have reflective sidewalls, which we like.

They do have a few small drawbacks. The studs make a sound like riding on gravel as you roll, and there is somewhat more friction slowing you down than with summer tires, especially on clear pavement. They don't hum as badly as mountain bike knobbies, and they don't slow you down as much either, but they aren't as nice as a lightweight bike with full tires on a warm day. They don't do anything for steel in the road, as I mentioned, and they don't work any better than other knobbies with thick slush, though they're better than regular summer tires for that. The studs can be twisted out of the little hole in the tire where they sit if you ride over a rut or something, though that has only been a problem with one tire so far really. And they cost money, which is unfortunate.

One wholesaler of these tires has more information about them than you can probably read in one sitting at this address. He recommends carbide studs, which last much longer than steel ones, among other things.

In the end this winter, after putting the tires on one kid carrying bike and not the other, we were relieved to have the studs on as winter has blown back in and some serious ice is back on the streets. They do take a little more effort to push, but not really much, and they really work well on ice. Don't expect them to solve every possible problem, but they do let you stop thinking so much about the icy road surface and give you time to concentrate on the cars.
at 10:06 AM