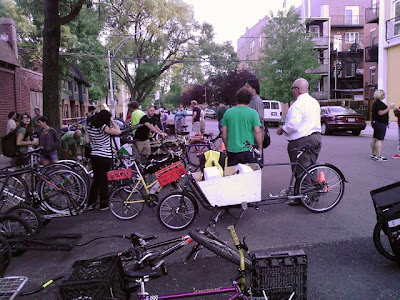 The Cargo Bike “Roll Call” was held this evening at West Town Bikes and pretty well attended by cargo bike aficionados and a few others. Nobody called the roll, and Cetma and Bakfiets were absent. It was an opportunity to meet people and ride fun odd bikes including many of West Town’s Alex Wilson’s small wheeled, heavy load carrying custom or rebuilt bikes (many a little like the Kemper Lorri). 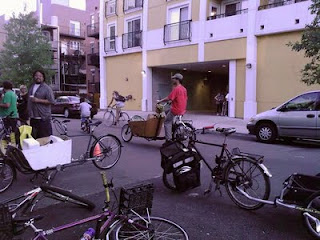 There was a Rhoades car quadricycle and a steampunk homebuilt wood and iron contraption with huge Fat Frank tires.
The Babboe City box bike, several Madsens and Xtracycles, a Winther trike, a Human Powered Machines Long Haul box bike, a Christiania trike, several Yuba Mundos, a JC Lind trike, our Onderwater tandem and Haley trike, a Bullitt delivery bike, and a set of Bikes at Work and homemade trailers with boats on them all made an appearance and most were ridden by everyone who wanted to.
Whole Foods delivered some yummy things with a bike trailer. A guy with a Chinese made Fietsfabriek-trike-copy with electric drive that was entirely covered with gray fake fur came by too with a small child balanced on top. Jon Lind was there but Copenhagen, Dutch Bike, and other dealers weren’t. Most people didn’t wear helmets.


A lot of people liked our Onderwater Tandemtransporter, and rode it with two grownups though it's better with kids on the little seats. Nobody wanted to get off.  Though nobody currently stocks them in Chicago Jon Lind has said he would be willing to add one or a few as a special order to one of his regular shipments if given enough lead time. I think after riding many of the others it is one that is worth considering strongly.

Another strong bike in a completely different category was the Yuba Mundo. It rides really smoothly and stably, and it does have lots of room for things in its large panniers. It seemed more well thought out than the Xtracycle though both can be very versatile if you only have one kid (or possibly 2 little ones like one family in town) to carry.


Though you can’t tell from their website it has a double top tube like a BSA Paratrooper frame that is much more in your way than the step through or low top tube designs other manufacturers use. I’m sure it makes the bike more structurally stable but it’s an irritant. The maker’s family website shows a smiling lady in a big skirt (no doubt intentionally) completely obscuring this bar so don’t be fooled. The box is small, smaller than the Bakfiets Long - it might be similar to the Bakfiets Short or the Fietsfabriek in size - good for max 2 kids. The handling was very odd, with understeer and oversteer alternating. I think this might be related to the handlebars set up low and in front of the stem, and it might handle well with North Road bars on a tall stem, but that’s an experiment to try. West Town Bikes’ Alex Wilson owns this one so if you are interested in a bike like this you should talk to him first.

The Winther trike, the Kangaroo, was surprisingly easy to ride. It is very smooth, forgiving and stops on a dime with its even front brakes. It has a coverable plastic cabin that seats 2 kids (and probably very little else) in comfortable looking sling chairs. You could easily use this to remain mobile on your bicycle with your kids all year round - everyone agreed it was like a luxury station wagon.

The Haley, we have found, can hold hundreds of pounds of cargo and go through normal doors (31 inches wide?), but its handling is much much better with 100 or more lbs in it. Empty it’s very tippy, as several people found tonight. Luckily nobody fell down.

The Bullitt was very smooth to ride, nearly as nice as the Bakfiets.
It had a steering damper to limit skittering in the steering. The owner has a company that has a name we like, Chicagocargo, and a huge weatherproof aluminum box on his Bullitt rack to carry your stuff for you so you don't need your own cargo bike.

My favorite bike of the evening was possibly Alex Wilson's custom fillet brazed yellow small wheel bike with huge welded platforms, made by Bubbly Cycles in Chicago - great handling and probably plenty of load carrying capacity. It's blurry in the photo because it's zooming so fast. I wouldn't put my kids on it though.