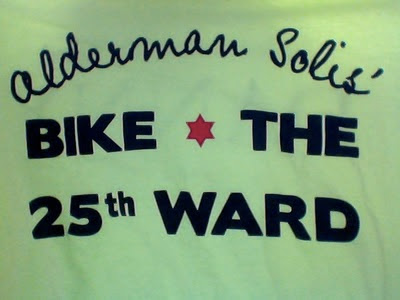 We went to the Bike the 25th Ward ride.

It was gray and drizzling a little today as we headed out. There was a good turnout nonetheless and the Mexican hot cocoa and fruit at the meeting point provided everyone a nice warm jolt of energy. The T-shirts were a nice bright yellow this year. Everyone signed up for bike info with Active Transportation and other groups. Raúl from Working Bikes brought his pedal powered record player for fun, though it played "Purple Rain."
The ride was fun. We zipped through Pilsen up Blue Island and Racine to Taylor, across and down to Chinatown via the bridge on 18th. Many people chose to skip the wet, slippery gratings (there are no plates on the bridge) and went for the sidewalk, including several of the important folks. It's safer to be safe. We returned to Harrison Park via Cermak and through smaller streets in Pilsen. Our kids enjoyed zipping forward to the police car in front and back to us but one of them got upset on the slippery bridge and bailed out into our cargo bike sag wagon. Many thanks to the other riders who were incredibly kind to our middle guy furiously pedaling along at the end of the pack.


The ride started about 10 and was accompanied by a loud, flashing escort of police vehicles in front and behind, which sort of gave the message that without such an escort you might not want to ride your bike on a Sunday morning in our ward. We all got headaches from the festive whooping. They might change the plan next year and get more bike officers to accompany the ride instead.
I spoke with Commissioner Gabe Klein for awhile on the ride and was impressed with his intentions and his nifty lightweight bike. Unfortunately, he didn't spill any secrets, but he indicates that the administration is very committed to dramatically expanding the protected bike lanes, with much work planned for the spring. Apparently there are many, many departments that have to sign off on everything. They really plan to achieve the 100 miles in the first year that the mayor promised.
The Commissioner implied that some of the upcoming cycletracks may be more permanently built than the trial lanes recently put in with fiberglass dividers. I asked him to think of my elementary school kids riding their bikes safely in town and he replied that he would like it safer for them, but also just for himself and his family to be able to travel safely. There are many ideas being discussed, including perhaps having some smaller streets with a bicycle rather than car emphasis, developing networks throughout the city, and reworking some of the existing lanes. A lot of these details will need to wait until better funding and increased public demand make more wide ranging changes possible. For right away, the stretch from North to Milwaukee on Elston will be spiffed up soon. He seems like a nice guy who is easy to speak with and willing to listen to and share ideas, so don't be shy about contacting his office if you have a suggestion.
Another fellow I spoke with works with Active Transportation in Pilsen. He said that many people's concerns there are more related to pedestrian issues and not bikes so much. Who knew? I think that the new bike lanes will be changing that attitude soon if they are easy enough for everybody to use. Pilsen seems like a great place to use a bike to get around and there are plenty of people there using bikes as transportation already.
Alderman Solís seems to remain committed to improving the cycling infrastructure in the ward and he is apparently working with some other aldermen to better integrate projects. What a difference a year makes. If you asked us last year if there was a chance of a protected lane or a bike ride with a CDOT Commisioner coming into our community before the end of this year we never would have believed it.
The Active Transportation Neighborhood Bikeways initiative seems like a really practical, promising part of their recent efforts. They were present at the ride as well. Sometimes it feels like ATA could steal more from the  Transportation Alternatives playbook and this initiative has a more active grassroots feel similar to what works so well in New York. Finally an organized way to support bicyclists creating deep changes in their own communities with their aldermen is emerging.  This is a terrific way to be involved to support the huge leap forward for our city that the Mayor and CDOT wish to make on the streets we all use every day. They have a small handful of ward bike/walk committees under way. As these committees build strength the network could have a lasting impact in the neighborhoods. This is a great way for family riders to cary the message that we want to help transform the streets too. Check out Walk Bike Lincoln Park to see how this committee has developed and get ready in your ward too. Reach out to Active Trans for more information on the link above.
So, all in all despite the rain it was a good time. Come with us next year!
at 12:41 AM