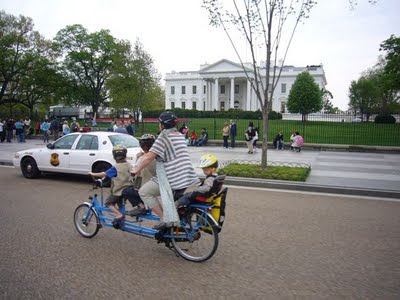 We visited people in Florida and the Southeast over the recent break and thought we'd tell you about what it's like to ride there with the kids. But after looking at the narrow, poorly maintained 4-lane road shoulders stenciled with a bicycle symbol that pass for bike lanes in Florida we gave up on that. If you want to ride in Florida I hear
they have some marked routes but nothing we saw looked inviting for commuting or family riding. Lots of people seem to ride slowly on the grass next to the road. Funny, since the weather is ideal for biking much of the year. If you know more about good biking opportunities there please comment below; we didn't see the whole state in 1 week. But the parts of Florida we saw didn't leave much of an impression on us in terms of biking. 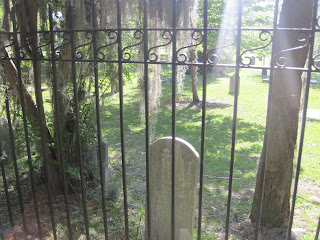 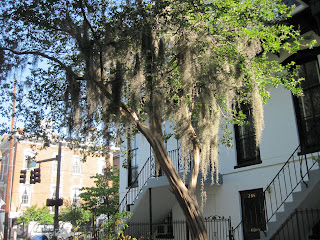 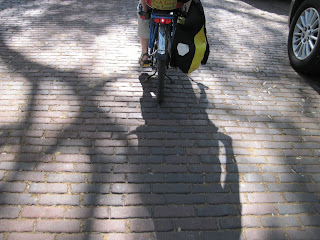 Savannah on the other hand was really nice for biking. Creepy Spanish moss and brick paving give it atmosphere and although there's no bike lane there's not much traffic either. Lots of students from the college of art and design seem to be pedaling all over the place and the little downtown is picturesque, with plenty of places to stop (if it's not Sunday, when most everything is shut down). Look at how much Spring they already have there! Chicago is just getting daffodils now. We still have the studded snow tires on the bike and it hummed on the bricks. 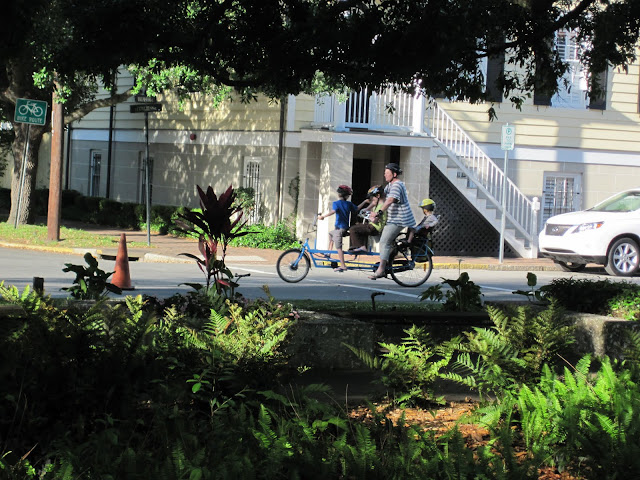 Another really nice city for biking is Washington DC. They've recently added a bunch of cycletracks to the many calm streets and big parks that you can use to get around. We were riding as tourists, not commuters, but there seem to be many businesspeople out on bikes and the lanes we rode are mostly well arranged for rapid travel. Smaller lanes extend throughout the city, though many other streets remain pretty unsafe for bicycles.
Some lanes are separated by cheap but effective fiberglass posts and paint, and they have separate bike signals on some lanes. We have photos from Pennsylvania Ave and 15th Street, one of the newest lanes. For comparison look at Google street view to see the old layout. 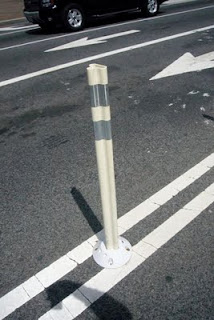 We had a big problem when we unloaded the tandem from the car in DC, though - the cranks would spin but the wheel wouldn't. The sprocket on the repaired hub was loose. The folks at Dutch Bike Chicago referred us by phone to a bike shop in a hardware store - District Hardware, in Foggy Bottom - which was wonderful. The friendly mechanics had parts and knowledge ranging over many decades and they quickly jury rigged a replacement for the overstretched retaining ring that had come loose on the sprocket. I think it's a part for an old Sturmey-Archer hub but it holds better than the Shimano it replaced. Their diagnosis: the R20 hub body might be slightly too short for the R25 guts we now have in it. They have a fun little museum case of old Campagnolo and Dynohubs too. 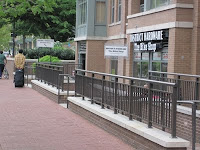 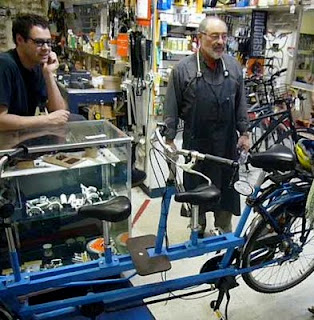 If you need a bike shop in DC you could do a lot worse than these guys.
There are food trucks in various locations throughout downtown - we ran into a Korean taco truck and a Halal food truck in Farragut Square - and if you're on a bike they beat the yucky cafeterias in the Mall museums and the crowds are different and maybe smaller.
After that, it was through NYC again (See our previous postcard from NY), another friend visit, and back to Chicago.
For a city that prides itself on its bike friendliness, I fear that Chicago is running a bit behind other cities. If you have a comment about separated cycletracks you'd like to see in Chicago, go to the new mayor's bike path site and put in your 2 cents.
PS- here's a good Streetsblog article about a study comparing cycletracks and "vehicular cycling" in traffic.
More on DC and Savannah on our next post, here
at 11:55 PM