The Terrible Swede- a trip to Andersonville with two books

Looks like spring may really be here. Reason enough to want to jump in the air. We have two more reasons. Last month we happened upon two new books we love: Tillie the Terrible Swede by Sue Staufacher, and Wheels of Change by Sue Macy.


Susan B. Anthony famously said "Let me tell you what I think of bicycling... I think it has done more to emancipate women than anything else in the world. I stand and rejoice every time I see a woman ride by on a wheel."
I couldn't agree more. Wheels of Change is a light hearted trip, for any age reader, through the blasting meteor landing of bikes in the lives of women at the turn of the last century.  Cycling changed everything from how women went out to what they wore.  Sue Macy's well researched book talks about why women first took to the road, then learned to race; and it addresses how the bloomer controversy shook the nation. Bloomers were more World Naked Bike Ride than Tweed Ride for the people of that era. I didn't know that at one time women actually cycled on bikes with both pedals on the same side of the bike. Great pictures of amazing bikes and bold women fill the pages.

Tillie the Terrible Swede
by Sue Staufacher and illustrated by Sarah Mc Menemy is a terrific kid's book about Tillie Anderson, the Swedish transplant to Chicago who took the 1890s bicycle track by storm. She eventually set four track speed records and became champion of the world. Our guys love the bright clear illustrations and solid story. Tillie stands up to family and friends who discourage her. She builds her own strength and rides on. She even finds love with the friend who turns her on to racing, and then totally supports her rise to the top. 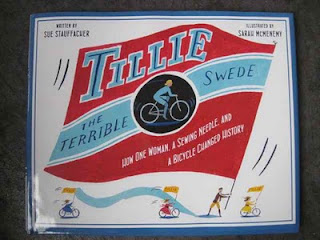 Spoiler alert: The only downside to either of these books are the last pages where cycling fades to the car. Even our dear Tillie turns to the motor car on the last pages. Hey, you could always glue those two closed!
It's just our luck that in May the wonderful Swedish American Museum of Chicago is hosting two programs about Tillie Anderson. Tillie Anderson "The Terrible Swede"  takes place on Thursday the 19th of May at 7p.m. Anderson's great grand niece will be on hand to talk about  her great aunt and her many accomplishments. Then, on Friday May 20 th  the author of Tillie the Terrible Swede will be riding her bike from Grand Rapids, MI to Chicago to be part of Tillie Ride! a day of activities at the Brunk Children's Museum up on the third floor of the museum.
If you've never been to the third floor of the Museum it's just amazing. A whole floor of dress-up and play. There are two model Swedish houses with kitchens and tools -- one in Sweden and one new immigrant's home on a US prairie -- to play in; gardens, a Viking ship and a steamship to travel to America on. Great fun always for our guys -- even my oldest still loves to play for ages. FYI they don't open til 1p.m. during the week on the third floor.
Getting to Andersonville: We ride up the lake and go west on quiet streets through Uptown. Wolcott is also terrific going north with a jog onto Damen through Bucktown. (Thanks to John Greenfield and Anne Alt for the route tip) We sidewalk the Damen bridge over the river, cross Fullerton then get back going east and back toward the north on Wolcott just north of Menard's building supply (big smokestack).
We love to stop and snack in Andersonville at Svea Restaurant, the cash only place for Swedish pancakes. They are only open until 2:45 weekdays and 3:45 p.m. weekends. Our kids like to sit at the counter. We also love The Sunshine Cafe for homestyle Japanese food including really good gyoza and tonkatsu after 4p.m. and Bakery Natalina for dessert. At Natalina, a mostly Sicilian bakery, we spring for cannoli. Their cannoli are just not like any you have ever had before. It's a crumbly shell filled with incredibly fresh just sweet ricotta cheese and sumptuous house candied orange peel on both ends. Yum. We also have a crush on the Middle Eastern Bakery on Foster for quick middle eastern pies to take out for picnics.
For those needing delicious coffee we find that the coffees at Natalina are amazing -- though you have to drink them in house (like in Italy) it's worth it! The Coffee Studio way north on Clark will give you a larger paper cupped take out coffee if you need it.
Bathrooms are to be found at all these spots except the Middle Eastern Bakery and Natalina. There is a Starbucks too if you need a bathroom in a hurry.
You can most likely buy (and definitely order) these books at Women and Children First bookstore, just a half a block north of the Swedish American Museum. It's one of our favorites. See you in Andersonville!
at 10:25 PM

Labels: Delightful Bike Books for Kids, Places in Chicago to go with kids, Places we Ride