So, we hear a lot in Chicago about how the Mayor is very interested in making His city a nice place to ride (or at least park) a bike, adding bike parking to the Millennium Park project and putting steel loops to park bikes on around the city. There's a nice lakefront path and a few little rides He and His minions permit, like the annual Bike the Drive fundraiser for the Active Transportation Alliance on Lakeshore Drive.
He has a lot to learn still. So do the bike advocates in the Windy City. Maybe the new mayor can do more for bikes. And, how can we learn from the success of bike advocates in NYC? (See Streetsblog, for example. They seem more confrontational but also more transparent than here.) Better bike infrastructure could finally make Chicago my kind of town. It's separated bike lanes, and bike lanes in general, that make riding in the city with kids and their stuff an appealing transportation option for many people, including us.
We were just in New York City and we thought we'd have a look at the separated bike lanes we saw on a video linked from the Chainlink to see what they were like. The people we asked in NYC weren't at all negative, like the ones in the video. They were all really enthusiastic. The lanes were pretty clear of obstructions and well separated from traffic, with bike traffic lights and places for left-turning cars to alternate with bikes. Lots of pedestrians cross the lanes for a few blocks, but that's in Times Square where people look like ants crawling everywhere anyway. The rest is mostly clear sailing. We would love to ride on lanes like this every day. Unfortunately, we didn't get any good pictures of the lanes in midtown.  Above is an image of a separated double lane in Brooklyn with a different design. It looks like nirvana, seen from Chicago.
But the separated lanes, apparently popular and wonderful as they are, aren't the only lanes in NYC. In fact, they have a huge number of different kinds of lanes throughout the entire city. Here's a map site.
This is a bike lane like most in NYC, on the left of the car traffic lane. In theory, you don't get "doored" by a thoughtless driver as often then, since there are more drivers than riders in cars. Most of these lanes are kept pretty free, though the trash trucks creep down them and sometimes spill. Not all bicyclists go with the direction of traffic, either, and some don't stay in the lanes. In the night shot below, that's trash in the bike lane and a city bus blocking it as a delivery guy meanders the wrong way down the car lane in Tribeca.  Most of the delivery guys ride with no lights on electric powered E-bikes. They ride on sidewalks, too, with bags hanging off their handlebars. Don't be like them.
But in the 10 minutes I was on this block, most of the time it was wide open and being used about every 20-30 seconds by someone riding the right way on the path, swerving out to avoid the trash.
The lanes are still really good, with markings across cross streets like crosswalks, even if the occasional cement mixer gets into the wrong place. 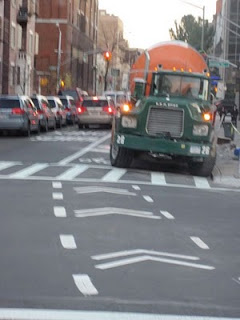 By getting most cyclists to congregate on the streets that have lanes, motorists see people using the lanes and learn to take cyclists into account more. Cyclists see each other, too. Messengers and grumpy fixie riders can choose the streets with no lanes and go as fast as they dare without any nasty other bicyclists getting in their way.
And most lanes, like this one in Brooklyn, have an area in front of the car stop line for bicyclists to move across the street or prepare for a turn or just collect in front of other traffic to increase their visibility. Logically, they call it a 'bike box' (not a box bike, though you could have a box bike bike box, I guess). There isn't even ONE of these in Chicago. How about just a couple on Milwaukee Ave?
These innovations all add up to a city that works better for bikes than the City That Works. Anybody can get on a bike and feel comfortable using it to get where they need to go. The infrastructure invites all those New Yorkers who don't even have a drivers license to get up out of their train tubes and into the light, breathe the air, and smile at the people sitting in immobile taxis, as they pedal effortlessly through their newly accessible city. OK, lugging their two heavy locks with them, but still.
Grrr.
at 12:08 AM