Register Your Bike Yet? 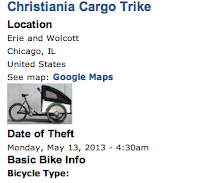 Saw an online classified ad this week for a Winther child carrying bike, about half price! The same day, the Chicago Stolen Bike Registry listed a Christiania cargo trike as missing.  It’s the season for lots of flux, some legitimate and some not.

We are really sad about the nice missing cargo trike, which we have passed often on our rides. Its loss inspired me to actually organize the serial numbers, photographs and descriptions of our own bikes (yes, it seems we have more than one).  We already have the locks pretty much figured out — no cables, lock to some big thing at all times even at home — see our lock post, and Ding Ding’s take on the wave of Springtime bike theft. Often you can get the serial number of your stolen bike from the dealer who sold it to you, though not always. But lately a lot of people have been recommending that we register our bikes too.

At a Bike Swap presentation early this spring, for example, they pointed out that even if the police find a stolen bike, they won’t release it back to the owner unless the owner can prove it belongs to him or her. The advice was to register the bike and its serial number before it gets stolen and have a picture of it, preferably with you next to the bike, so you can demonstrate it’s yours. No written down serial number often means no bike. This is a stupid but apparently pretty common policy. What is more, the police databases don’t all connect to one another, so a bike stolen in, let’s say, Evanston won’t show up on a Chicago search. University, state, city, sheriff and other police departments are also all different.

So I made an account on a site called Bike Shepherd via the Chicago Stolen Bike Registry link at the top of their page and started typing. (Edit 3/2014: they now link to a noncommercial bike registry in Chicago called Bike Index, at bikeindex.org.) There are several registries, but this one, based in England, seems to get used and has a good reputation among bikey people we know. The site wants your name, address and email to start. So far no spam has come back, just registration emails.

The form you fill out for each bike records the serial number, purchase date and place, value, brand, model, color, frame size, description and photo. It accepts incomplete information and you can edit it later. Include anything only the owner might know (like the contact info labels you left in the handlebars or stuck inside the wheel rims).

The hardest part for us was taking the bikes outside into the light for their mugshot pictures and uploading the photos to the computer. The police officer at the bike swap suggested using an actual recent picture of your actual bicycle, not a catalog shot. Getting a version of a photo that fit on Bike Shepherd’s site (the limit is 1 Mb but smaller is apparently much better) worked best with screen shots of the photos.


The serial number can be hard to find on some bikes. Our old loop frame, for example, has such thick black paint that you have to look at just the right angle to see the numbers, on the back of the seat tube as with most Raleighs. Old Schwinns tend to have them on the head tube under the badge, or on one of the back wheel dropouts. Most more recent bikes have a serial number stamped underneath the bottom bracket — the part where the pedal cranks attach — or on a plate near the back brake. If all you find is a number sticker keep looking for a stamped metal one.

The site then sends you a PDF file with everything in one place, stores the data and prepares a “Pulse ID” number for you. You can print an ID from the PDF, or buy fancy plastic cellphone-readable stickers to put on your bike if you want. We decided to hold off for a bit on the whole Pulse thing. Maybe we’ll stick a printout in with the tubes when we fix the tires?

You can click on the record to delete a bike or mark it as sold or stolen. The data record is supposedly kept for many years, unlike police registrations which are apparently deleted after only a year or two, at least in Chicago (if you are interested, the CPD bike registration page is on the Chicago city website.)

That’s it. Put your password and user ID for the Bike Shepherd logon in a safe place or goodness knows what happens. Maybe send a copy of your bike’s info page to your insurance too.

Then, if your bike ever goes missing, you report it to the police, log on, list your bike as stolen, and, um, what happens?  Hmm. Bikes listed in the Chicago Stolen Bike Registry don’t seem to automatically appear in Bike Shepherd, or vice versa. You’ve got to do both. Is it worth the trouble?

Well, besides hiring an armed guard, there’s not a better option. And, apparently, police all over do accept the computer registration as proof of ownership. The Pulse ID might make your bike more traceable if a dumb thief leaves the sticker on. Some police departments, bike shops and used bike dealers even search the databases sometimes. This is good, but if our bike disappeared we’d surely hang flyers in local bike stores and coffee shops as well, along with ads to hire a new armed guard.


By the way, on a sort of related topic, I also talked with someone from the Chicago Transit Authority today who confirmed that a bike locked to a pole, sign, or anything that says ‘CTA’ gets cut off and taken to the clerk’s office in the garage at the end of that bus line, where it stays for an unclear amount of time. (Maybe until they decide to throw it out or ride it home?) More on our post about sucker poles. They don’t try to contact the owner or report the bike to the police. Look there, too.
at 10:35 PM