You can guess we both write this blog, my better half and I.
Readers can usually tell which of us has written what, though our writing is blended in many posts. To follow the post yesterday about what he doesn’t see in the Streets for Cycling Plan, and noting the excellent comments from our anonymous commenter, I get to throw in my two cents today. This post is all my work, yesterday’s was his.
From the Inside Out
I worked as part of the team of local riders who worked through this winter into spring to get input from around the city to shape the Streets for Cycling Network. This was a once-in-a-lifetime chance and I am more than grateful for having had the opportunity.
My volunteer work for CDOT and Active Transportation Alliance was eye-opening in many ways. Changing our streets is a complicated process but the team steering the project has a strong desire to make sure that the plan is devised by Chicagoans themselves. This is a new idea in street planning in Chicago: simplify the process by using as much public input as possible, in order to zero in on what will be used. Our team was given the power to organize as many meetings as possible to reach out into the city for public input from every kind of rider and non-rider.
Now that the draft plan is out I have heard plenty of flak on the Chainlink, at home and around my neighborhood. I have also heard just as much about how community members from our meetings are excited by clearly seeing their input in the draft network. The network is under public review right now and anything you might want to share about it is on the table.
Our city engineers are at these meetings and able to field technical questions you might have or note ideas not included. “Blah blah,” you’re thinking, “I can read this on the web page”... and you should, because my writing is not any kind of official take on the plan and you need to go see and comment for yourself.
What does it really take to influence the planning and get your voice heard? Why haven’t family cyclists been heard if they haven’t?
These are important questions if you agree with my husband’s post.
My answer — whether I agree or not — from my own experience would be that the threshold for hearing from family riders in Chicago is pretty high.  Though we held three to four meetings a month in our region from December to March, very few to absolutely none of the riders who came to our meetings were used to riding with kids in mind, much less carrying their family along for the ride.
Advocates for children or families who are not currently comfortable riding were a more active part of our region’s input.  And others of our city regions were organized by teams that included a family rider, so family riders were represented, but our job in the CAGs was not to give only our own insight. Luring other people to the meetings to get their information was the point. There are not that many of us to lure who already actively ride comfortably in Chicago with our kids, and we tend to clump in a few neighborhoods in the city.
For many reasons, no one in your family might have been able to get to meetings for Streets for Cycling or give input. It’s just hard for parents to get to meetings — especially on winter school nights.  It’s key to making the plan for an 8-80 network to hear from families, but if the input from families is extremely low the planners are not going to know what we need and we will realize less change from this plan.
In my experience, the engineers and planners working on this project are deeply interested in all of the information they can get about how to create good lanes for the city. In a process built on input, the perspectives that are not shared with the planners can’t necessarily become a huge part of the planning.
The bottom line is that family riders— or anyone else— feeling left out of the draft plan need to share their thoughts about their own regions and other parts of the city at the public meetings, by email or by webinar.
I heartily suggest participating in one of the two public meetings, that are left, as they are good forums for getting interesting questions answered in a give and take atmosphere. It’s not too late yet! And it’s just the beginning.
On to making good family riding infrastructure into reality...
The chance to influence how this plan is actually realized means giving input now and then many more meetings and much more input, and direct work with your Alderman and other city and state representatives over time as the plan is made a reality.  That means all of us need to keep coming to meetings, probably for the next few years.
The Bikeways Campaign Coordinator at Active Transportation Alliance is laying the difficult ground work for each Ward to grow a pedestrian/bike/transit committee which will get movement going on the Streets for Cycling plans once they are done. This means that you need to reach out to Active Trans and your own Alderman, and find out how far along your own Ward organization is.
Equitably establishing these committees throughout the entire city is a difficult but  important task for Active Trans to undertake.

Helping your community take this step is essential. The funding to create the bulk of real safe lanes for the youngest to oldest riders in Chicago eventually rests in your Alderman’s budget. Check out the web sites for Bike Uptown and Walk Bike Lincoln Park, two committees that are up and running now. 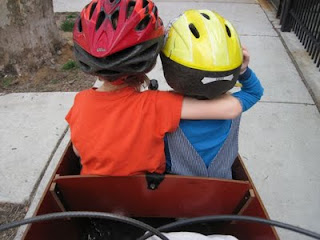