Today found me unexpectedly downtown to see my dentist. As many readers of ours probably know, the NATO summit is being held in Chicago for the next three days.

Surprisingly, Chicago is a little like a medieval city. The center sits on the lake bounded on all sides by the river. To reach the Loop or centrum you must often cross a bridge that can be raised or lowered.  Much like an ancient city under siege, most of the bridges from my neighborhood were closed to people crossing, and I had to ride north and pass a guard to cross into the Loop.  The streets were mostly empty -- no cars at all parked along the sides.

Plenty of people were walking along or riding but with so few cars the walkers and bikers took the city just as I rode through. I missed seeing a march of protesters at I sat immobilized on the eighth floor of an early, fortress-like skyscraper in the dentist chair.  But my dentist and I listened in her still office to the protesters passing along beneath us.

Even the huge police presence, like old standard bearers, is largely in groups on foot or on bicycles wearing insignias on their vests. Police have come from many corners of the country to reinforce our city legion. If you ever wondered  how easy it might be to ride your bike in a riot helmet it would seem that hundreds of Chicago and Philadelphian police officers find it pretty easy.

On my way home, the empty streets, police  and feeling of everyone just waiting spooked me a little but my face was still incredibly numbed which made it hard for me to concentrate while I rode.

I stopped at the always filled-to-the-brim Intelligentsia Coffee by my dentist's office to let things wear off a little, only to find it nearly empty with a broken espresso machine. The wary baristas were all looking forward to closing up early and hightailing it home out of the Loop. Unable to handle hot coffee with my frozen cheek, I sat and watched the technician strip the sides of the La Marzocco and tinker while iced coffee they had on hand kept me company. Everyone said they were relieved to be closed for Sunday and we all agreed that we hoped to stay far from the city center for the next days (though the unrest moved through much of the city north of the center today). 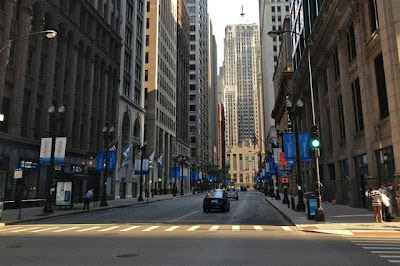 When I finally headed off on my bike I couldn't help taking an extra lap down deserted LaSalle St. where the barricaded bank fronts were juxtaposed with an open door on the familiar shadowy face of City Hall.  City Hall seemed surprisingly peaceful as CPD officers waited together congenially out front for a busy evening to come. 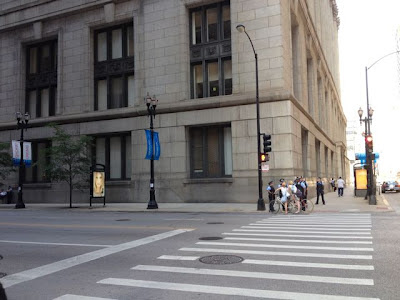 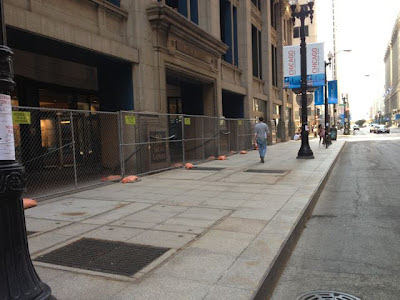 The constant sight of helicopters, planes, and buses loaded with homeland security reminds my husband of being in Bogotá during a manifestation for M19.  He hopes the veteran nurses protesting the mayor's recent devastating health care cuts didn't seriously injure any of the heavily armed policemen.


As our small family couldn't all leave the city together this weekend we reluctantly decided to all stay at home. Hopefully tomorrow will be quiet in our little corner of Chicago. I hope wherever you are if you happen to find yourself in Chicago that it's peaceful for you too (or as safe as possible if you choose to protest) as we all spend long hours of quietly waiting for the end of this summit.
at 11:59 PM