Few parents think first of tricking out their children's bikes with lights. Here in America, cycling with lights, while a best practice, is still optional. It shouldn't be.

Can you find the kid on the bike? What if it were a rainy night?
Click on the pictures to see them in more detail.


Creating good riding habits is part of growing a young rider. Like learning to brush twice a day, using lights on your bike is central to good health. Day and night, lights front and back on even a child's bike provide essential visibility so that drivers of other vehicles on the road can see you better, and of course at night they are key to actually seeing where you are going.  They help you see and be seen.


Mounting good lights on your child's bike can be cheap or expensive but it's a terrific habit to begin from the earliest days of your child on his or her own rig. (Obviously we think you should have lights front and back on your kid carrying bike -- see our dynamo lighting post for more information about lights on grownup bikes). So herewith a quick primer on lighting your child's bike from soup to nuts.


Your kids are smaller and less predictable than you — they need better lights than you do yourself!


Visibility, maintenance and cost are the three most important factors to look at when choosing lights for your kids' bike.


The lights themselves
You can get little blinky lights, some of which look like toys or characters, and stick them on your kid’s bike. This may be the most popular option, cheap and easy and fun, but even with new (expensive replacement) button batteries those lights don’t attract much attention in traffic. They seem bright in your hand, but in traffic they are not very bright except in one narrow direction and they get dimmer and dimmer as the batteries wear. And people, especially kids, forget to turn them off, so they wear out quickly. The blinking light may seem to attract some attention, but as a driver it’s hard to exactly place a blinking light in space, if you even see the feeble flashes. Drivers have trouble determining the distance to the bike. It’s hard to trust your child’s safety to one of these. We don’t use them much, though sometimes they are handy on the back of a helmet or bag in a pinch because they are lightweight and much better than nothing. The kids like to play with them.
Visibility: 3 of 10 [10 is good] (narrow angle, not very bright, even when turned on)
Maintenance: 2 of 10 (need expensive batteries changed often, need to be taken off locked bike)
Cost: 9 of 10 (about $5 - $15 each)


There are bigger battery lights like you might put on your grown up commuter bike. We use these on some of our kids’ bikes, since they clip or screw on easily to nearly any size bike, or occasionally on the back of a helmet. Usually they feature bigger batteries and lamps so they’re brighter but heavier than the little lights. However, like the little blinkies, they will wear out if left on and most (not all) have a limited angle where they are seen well. We think they work better if constantly on instead of blinking. Like the little ones, they are easy to steal or lose. The rechargeable ones — some even use USB to charge — cost a lot of money but can run out and need charging, get stolen, or be lost, so we go for ones that take AA batteries, which we change frequently.
Visibility: 6 of 10 (depends on angle and age of batteries, must be turned on)
Maintenance: 3 of 10 (need cheap easily available batteries changed often,
need to be taken off bike when locked)
Cost: 5 of 10 ($15 to $30 each for AA or AAA batteries, much more for rechargeables) 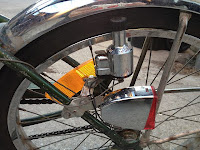 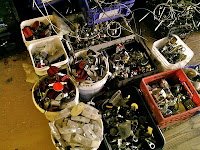 Old fashioned generator lights don’t get dimmer if you leave them on and they are cheap. They are always on the bike and ready to go, but they can drag on the wheel, they’re not bright enough to see well in daytime, and their bulbs burn out eventually. They and their parts have become hard to find. We find them in the rummage bins at Working Bikes for about $15 for the set of generator, front and back lamps in usable condition. If you stop moving they stop lighting, so they aren’t great at nighttime intersections. We use these on our kids' bikes and they are a pretty good option, but we’ve often thought that there must be something better.
Visibility: 6 of 10 (great except when bike is stopped, always available)
Maintenance: 4 of 10 (occasional bulb changes once installed, but sometimes needs adjustment of tire dynamo angle due to hum and drag)

Cost: 10 of 10 (entire old system costs about $15 in Chicago at used shops - Working Bikes selection is in the picture.)


Newer LED generator lights are the something that’s better. They burn brightly and last forever. They are especially better with a dynamo hub since it doesn’t create noticeable drag like a tire dynamo, though the expense keeps us from putting one on our kids’ bikes. The lights can also work with a tire wall or rim generator, some of which are quiet and don’t drag much. These lights, like the older ones, are always there. Recent LED lights are easily visible over a wide angle, even in daylight. Many have a standlight that stays lit at intersections. Some even have a brake light feature. Installation is more work than just sticking that blinky on, but it is paid off with brighter, more reliable light without maintenance.
Visibility: 9 of 10  (pretty much as good as you could expect,
stay lit at intersections, always on or available)
Maintenance: 10 of 10 (nothing to change once it's installed as long
as it's not damaged, assuming a hub dynamo... With an old
tire dynamo that needs adjustment, maybe 7-8 of 10)
Cost: 4 of 10 (front $35 and back $25 minimum, plus generator or
hub dynamo, $5 to $100 and up)

We recently upgraded to high quality LED standlight generator lamps on the front and back of our kids’ bikes, making sure they are aimed to be seen well without blinding drivers. (cost $40 to $75 per bike) As the kids grow and move to bigger bikes we've moved the lights too, reinstalling them on the new bike. They should last up through high school, we think. We have been using old generators (five bucks from Working Bikes like those in the pictures) to power them, and the drag isn’t as bad as you’d think when they're set up well. Look at our dynamo lighting post for more information about installing them and links to suppliers.

4/14: we recently had to fix up a grown up bike that had an old fashioned incandescent light running on a wheel dynamo, and we bought one of the newer (2012) LED lights, a LYT T Senso Plus from B&M with Licht24 daytime lighting. The idea is that at night, the light is pointed down at the road and cuts off higher so it doesn't blind oncoming traffic, like a car headlight or the LED lights we list above, but in the daytime the lamp switches to four bright LEDs pointed higher so traffic sees you. It sounded like a gimmick and it adds $20 to the price but it was what was available quickly so we bought it. And guess what? It really works well - surprisingly well. This is definitely something to consider for your kid's bike if you plan to buy a new headlamp.

On kind of the same note, when you set up your kid's lights, please try to make them visible without blinding oncoming traffic. Some of these new lights (mostly ones for mountain biking I guess) are really bright but don't cut off the beam.

Labels: Mechanical, Teaching Kids To Be Safe On Their Own Bikes