Another Little Postcard from NYC 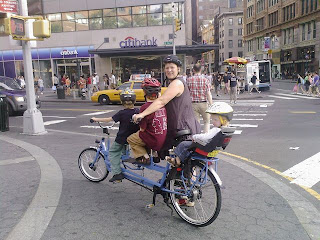 Well, we had another chance last week to ride around New York. A post we did earlier described some of the bike lanes they've been installing there in the last few years, concentrating on Brooklyn, and this time we had almost a full afternoon to ride up and down between Soho and into Central Park. 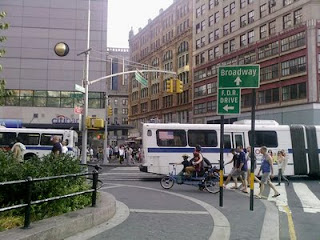 There are a couple of protected lanes that take up a full lane of traffic or more, including 1st Avenue going north and Broadway going south. These lanes are on the left of the road, next to the curb or pedestrian area, with a 2 foot space to the right, then parked cars. The space limits the chance of getting hit by a driver's door.

Our kids could manage riding the protected lanes without any problems, I think. The crosstown streets in midtown, Soho and Greenwich Village that we took were pretty calm as well but I wouldn't take the kids on their own bikes on them since the traffic is too unpredictable. Broadway is great except for the several blocks around Times Square where it's like riding walking your bike through the food court in a huge mall.
There's a great sounding event called Summer Streets three weekends in August where they close off a bunch of streets to traffic and open them to pedestrians and bikes, like Chicago's Bike the Drive but free. Don't miss it if you're nearby! We're hoping to get a chance to ride it this weekend on our way home to Chicago.
at 11:00 AM