Why not try the North Branch Trail? 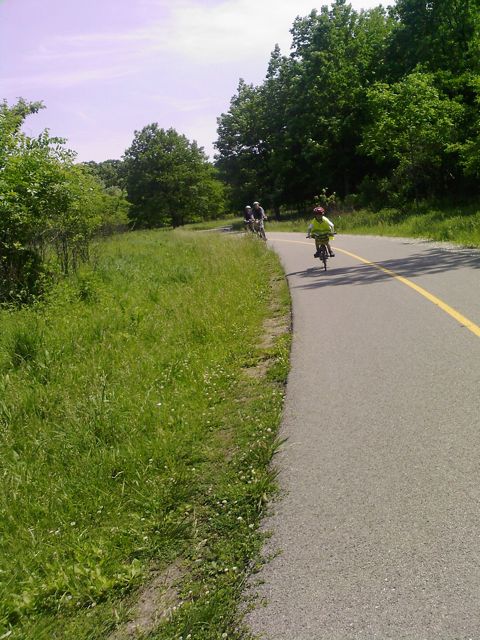 We have lived in Chicago for many years but for some reason never rode on the North Branch Trail, which connects Devon Ave at Caldwell to the Skokie Lagoons and the Chicago Botanic Garden near Lake Cook Rd in Glencoe. It's a great place for a kid who isn't completely at ease on a bike to practice and for a bigger kid to really ride without thinking about cars. That and it's green and outdoorsy. The trail follows...
a thin line of greenery buffering the North Branch of the Chicago River. A map is a good thing to have, but most Chicago maps don't show the trail.  It covers two counties, and each one only maps its own part. Google has it here though. 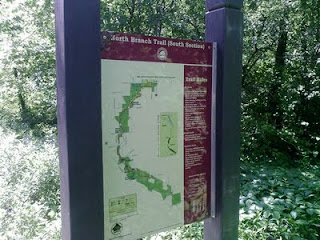 To get there from town, you could ride up Milwaukee or Lincoln or something and eventually arrive at the trail, but if you are like us and bringing kids and stuff that goes with kids and you're lazy like us maybe it's easier to use a car or public transit to start. I can't imagine taking kids on their own bikes on Milwaukee all the way up to the trail. We need to work on a good route there - any ideas? Use the comments below.

The Metra trains toward Fox Lake (MD-N) go to Edgebrook, right at the trailhead, and the Metra Union Pacific-Northwest (UP-NW) trains to Crystal Lake will stop at Norwood Park, just a bit southwest of the trail. Look at a map to be sure. For some reason the trail starts in Edgebrook at the intersection of Devon and Caldwell, where a big red sign says "Forest Preserve Bicycle Trail", not "North Branch", not further south where the green park space begins. Be careful going from Norwood Park - there's a path into the woods that doesn't connect to anything near Merrimac Ave and the Whelan Pool center. The North Branch trail is either east or west of that.

We couldn't face having to take the Metra today and it's a pain for us as non-habitual Metra riders (it's so suburban to know how to take Metra) figuring out which Metra trains they'll let which kinds of bikes on and when there are blackout dates- there are plenty of those this summer, (here's the link to the rules) and buses only hold 2 bikes each, so we threw the kids and stuff and 4 regular bikes into our van and headed off. This is perhaps the first big problem with the North Branch Trail - it doesn't go from somewhere you are to somewhere you want to go, it's just a place to ride around. But let's pretend you actually want to go to the Botanical Garden.

You can park your smelly big car like ours easily in Edgebrook on the residential streets near the trail, which mostly require a neighborhood parking sticker only for a couple of hours a day, but I wouldn't park in the commuter lot at the Metra stop. We had no trouble finding a place on a street. There's another option in a minute...

First, though, we stopped at Sukhadia's on Devon and Rockwell, between Western and California, and had a huge vegetarian Indian meal on styrofoam plates with 1000 of our closest friends. They don't mind kids, since it's like a cafeteria, and it's inexpensive and good. Here's a picture. 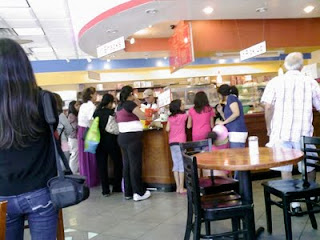 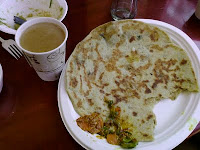 Go for the bhel poori (pic on left) which is cooling and yummy. The kids like mango lassi of course and idli, steamed rice flour dumplings, but Dad always gets to eat the delicious sambar (spicy lentil and veg) that comes with it. Instead of samosas try the batata vada, chick pea flour dumplings filled with potatoes and veg and some chilies. Yum. Our old standby is the anything sabji, where you never know just which combination of delicious veg dishes will accompany your chosen bread (for example, roti sabji has roti (large chappatis) and 2 veg and relish and yogurt for $5.50). Do not forget to save room for the marvelous sweets, snacks and masala tea. We like the patitsa sweets best - they are like the middle of a homemade Butterfinger - but you need to ride your bike for an hour after each one, they are so full of delicious butter.  Our kids fight over the badam pista. The Sukhadia's people will be glad to let you or your kids taste the sweets first! They mail order snacks and sweets too for those of you outside Chicago - ask for a sample selection!

So our meal was the highlight of the morning, but if you don't like Indian food, on the way west to the trail we passed this pizza place with all day sushi: 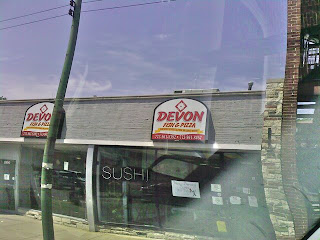 If you aren't in the mood for that, Superdawg (if you are from out of town you should click this link!) is really close to the trailhead, too. Nothing like fries and a healthy meat tube to have to burn off on your bike, right? So we parked, and off we went on to the trail, and, gosh, it just parallels Devon Ave for a half a mile. Eventually it eases off to the North and you find yourself in - a woodland reverie? A prairie landscape?  Er, not yet, it's a huge mowed campground, but at least there are bathroom huts. If you came from Norwood Park Metra this is where the green path you took meets the red path we are taking. And this would be another ideal, free place to park if you drive. It's called Caldwell Woods or Bunker Hill. Here it is:


After that, there's some woods, and some more campgrounds, and some more woods... Pretty soon the trail gets greener, with fewer campgrounds and more trees and fields. Often you can see backyards through the trees on one side. Joggers with their kids in jogging strollers and inline skaters contend with go-fast guys ("Freds") barking "on your left!" and our kids and we are stuck somewhere in the middle. The trail is all paved, with lanes about 4 or 5 feet in either direction and a solid line down the middle. It's popular, but not too crowded. Our 7 year old loved every minute of it. 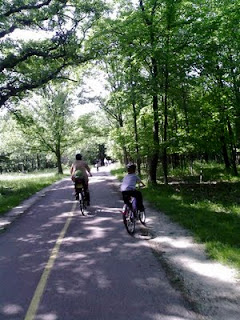 There are a couple bridges over big streets like Oakton and Lake Ave. 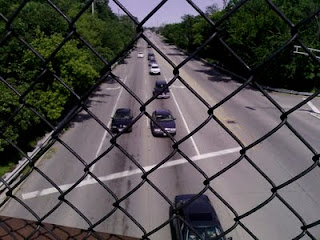 but most streets get crossed by foot. One, Howard St, doesn't even have a crosswalk.

Dempster is especially clunky, though at least the go fast guys can all zoom up Lehigh's awesome separated bike lane instead of the trail at that point.
We got as far as Golf Road and everyone started breaking down. We had to turn around there.  There's an equestrian center there at Harms Road and Golf, where they give pony rides on the weekends from 9 to 5, and the highest street crossing buttons I've ever seen. Warning: the pony rides are featured in a huge sign that your kids WILL see.

After our turn around point, if you continue north, you loop through another campground and soon wind up just next to Harms Road for awhile, twisting back and forth on an indirect northerly path to the Skokie Lagoons. You can go on the east side or the west, east is further from the road, both go the same place. Look at the Google map above if you want details. You eventually enter the Botanic Garden from the south, and they don't charge admission, only parking fees, and bikes are free. They don't let you ride your bike inside the Gardens themselves. If you don't want to come back the same way to the city I think the Green Bay Road path toward Evanston (or the Metra line that runs along it) are other options, but look into it first. There are a lot of bicycles-on-Metra blackout dates this summer. The Baha'i Temple is close to that route and has beautiful gardens and would be worth a detour.

If you go, there are plenty of bathrooms along the North Branch trail, but you should bring snacks and drinks, (there's water at the campgrounds) and don't forget sunscreen! And, I'm calling them campgrounds, but they are for grill parties, not actual camping. You won't be able to pitch a tent there overnight, but if you have a bike trailer with a grill on it and some friends this could be the ride for you!

We finished our day by riding back to the van and driving along what we could of the rest of the trail as preparation for the next time we go. I think we'll take Metra or buses and start as far North as we can and ride back. All in all, the trail is an urban park kind of trail - but it's relaxing to get away from the streets and cars for awhile, and kind of a nice change. We'll go again soon. Do you know any other good paths in Chicago? 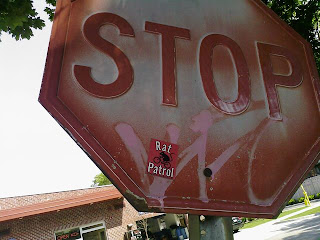 Labels: Getting places, Places in Chicago to go with kids, Teaching Kids To Be Safe On Their Own Bikes