Grow Your Own School Bike Train

Our school began its first bike train this spring. Inspired by the Portland bike trains and local hero Jane Healy's train in Blue Island,  we grew our own school train. Maybe you might want to try one too! 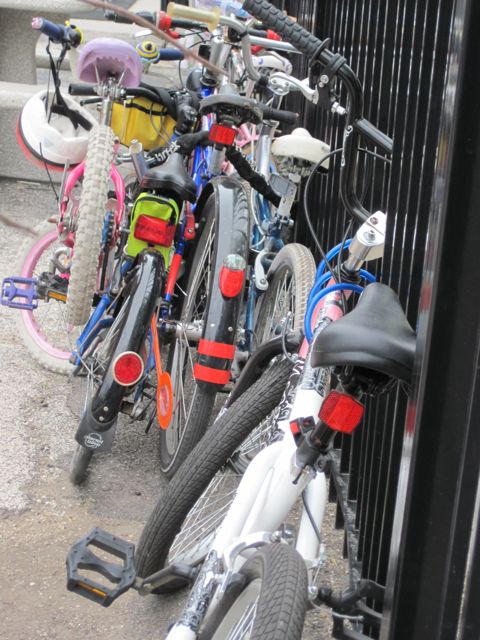 Some of what we learned making our bike train work might help you plan yours...

There were a mix of factors specific to our school that we worked through as we got our train out on the tracks. We're a magnet school which in Chicago means that we come from many far flung neighborhoods in all directions to get to school. Very few parents are commuters on a bike, especially not with kids. Urban traffic in Chicago is unaccustomed to children on the road and there is very little infrastructure (but this could change) that encourages families to ride.  We anticipated kids with varying skills mixed together on the train. Where to start?  After trolling the Portland bike train site and thinking it over all winter on our ride to school we began by talking up potential parents first.

Finding Families
Our first step was to talk to other parents we knew at school who might be even remotely interested in riding.  Though we have a nascent few parents who ride to school we tried to reach out too to bold, funny moms and dads who might be game to try a train even if they have never tried to ride to school before. We found three families willing to just give it a try, a new Madsen riding bike commuting family and a year round bike commuting teacher to round out our trip. Finding the first families excited to ride naturally led to figuring out our route. Five new to biking to school families who wanted to try the train lived on a south to north trajectory to school. The more experienced riders lived off that line but were willing to ride to meet us. We had about six-seven families total which included about twelve kids. We set up an email list, checked in with school staff, chose a starting "station" that was on a quiet street for meeting at the home of one of the train families and got to work on a route.


Choosing a Route
Finding a safe, quiet route for the bike train to school would give parents and kids on the bike train plenty of confidence. In busy Chicago morning commuter traffic we needed the bike train to cross at a traffic light at all main intersections (Division, North and Milwaukee) and four-way stops at all others if possible. I test rode a variety of routes in the mornings during the ride to school and then just after drop-off to check the traffic on the streets. One route that looked promising by another school with crossing guards had wrong way one ways on each side of Division. Darn.

The guys had a favorite route which had a light at every main crossing, four way stops at almost every other intersection and..... was being repaved. It was totally rutted and bumpy for a quarter mile stretch. Torture for some of the beginner riders we would pick up on the way. It had the important added benefit of being easy for our riders who were getting on the train to get to easy quiet spots for stops comfortably to ride all along the way. Hmm. We rode it every day for a week and a half. Quiet traffic, good crossings, good stop opportunities. Ok. Now to figure out the timing.


Timing is Everything
We had a mix of older stronger riders, kids on cargos and younger newish riders. We had to get to school on time and not be rushed but not leave so early that anyone who wanted to join would get intimidated. We timed our ride on the route with the guys and it took about twenty minutes taking it very easy with just two kids that ride often. We added time for stops, missing a few lights and some late arrivals coming up with a meeting time about fifty minutes before school with a departure time closer to forty before the entry bells. 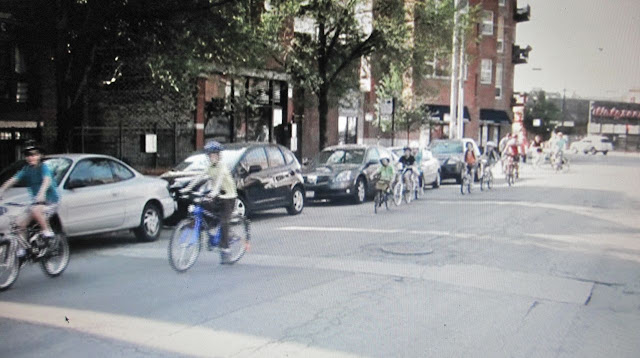 All Aboard!!
We sent out the route with the "station" and arranged "stops" a week before our first ride with a note about the bumpy part of the ride and a reminder to everyone to do a good bike check in the days before. Then got ready to go by packing basic tools and pumps. The afternoon before the first train, full of anticipation the guys and I rode the route backwards on our way home and found the paving trucks preparing to lay black top. Could it be?

Friday morning we set off on the Train! We left from home on the Near West Side with the bike trailer loaded, without a forgotten community thermos of coffee but with two dozen muffins to share in West Town on time to meet. Everyone slowly arrived with their bikes and had a muffin and got ready to go. There was a quick review of turning signals and explained crossings. (We go through lights and stop signs together in the group. We wait for a fresh green light before crossing any intersections so that we stay massed up in a group. Morning parked cars often have someone sitting on the drivers side and our lead riders and other grown-ups watched carefully to prevent dooring.)  It was incredibly fun as we pulled up to the stops and kids got on. We were a little behind schedule but everyone was there and we moved along at a good pace. Stops were going off without a hitch and then we got to the bumpy street and curve. Huzzah. It was freshly paved beautifully by Cdot the whole way with gorgeous new blacktop. We made it to school early and all of the kids in the yard ran over to cheer the kids in.

A Month of Trains
Good planning and attention to the route got us off to a solid start. Bringing a big thermos of coffee and extra cups and muffins doesn't hurt. Sharing locks and finding helmets for kids without them also helps.
We supported our newer riders with the quiet route in and slower riders by just cheering them on and not leaving them behind. We had a hiccup on our second ride as an excited school parent rode close very slowly behind in a car for a stretch which stressed the drivers passing us. Other than that we had a fairly quiet time on the road.  One very special morning a school family that lives many miles away gloriously arrived in a rickshaw to join us. We gained three more families by the end of the school year a month later. 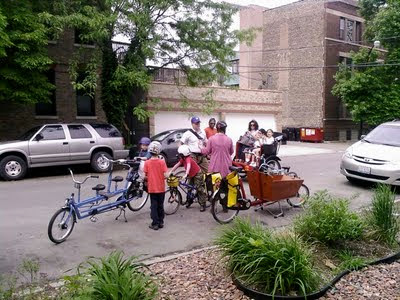 We did not initially use reflective vests but found a bunch in sale at Ikea and bought a pile which we then silk-screened for the train for the up-coming school year.

Looking ahead we're hoping to hold a bike train pot-luck this summer. We'd love get some more new families in so that we are all ready for the first Friday of the new school year. We are growing a west to east train as well which could pick up students living too far from the current route. That would give us two trains for next year at our little school. We'll keep you posted. Please tell us if you get a train going at your school or share some of the advice you might have from your own amazing trains!
at 12:30 PM