Our middle guy is starting to talk about his upcoming birthday party - "upcoming" here means long after the thaw comes. So, while enjoying what's left of the snow, we'll share what we did last year: a make it ourselves Bike Festival.
Our party had three parts: bike decorating, a freewheeling parade, and cake time.
Beforehand, we found out if each kid we invited was a two wheeled or training or balance bike rider. We had test ridden the route for the parade a few days ahead of the party. We live close to a university campus which is a great place for this kind of fun. If you are heading to a park or just around the block you'll need some grown-ups at all the alleys and intersections to keep an eye on everyone.

On the day of the party, there was a table out in front of our house with a pitcher of punch, small sandwiches, and snacks. In fine Chicago tradition, garbage cans across the street closed off our small cul-de sac. A better method for closing the street might be to call your Alderman and get it officially blocked off! People looking for parking kept trying to sneak by. A boom box was playing techno music good for biking. Then we pulled all of our extra bikes and trash bikes out so that grown-ups who "forgot" bikes could ride if they wanted to. A pump and some tools got a lot of use - everybody needed to fix something. 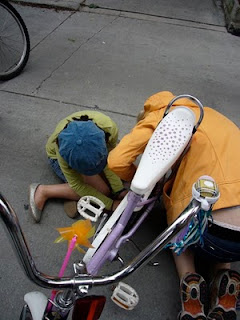 As the kids and their parents arrived we helped everyone to unload their bikes and welcomed them. We gave everyone bells, pinwheels, spoke covers, and silly handlebar streamers (bought in bulk from Irv's Bikes old stock and a party store) for favors at the start and got to work winding crepe paper into spokes and getting the bells and streamers on.
We cut up thick plastic disposable plates to get 2 rectangles out of each, popped 4 holes in each rectangle and threaded a zip tie through in a figure 8, around the seat stay or fork: instant bike motors! This was the cheapest and most fun part, and all those kids still seem to have the motors on their bikes many months later.
The decorating took ages - and everyone had a blast fiddling and munching and talking. With snacks it was fun and a little bonk insurance for the kids who might not have had lunch yet.


After decorating the bikes and getting everyone full of snacks and ready to go, we got organized for our parade. Older kids helped get everyone up on their bikes and they mixed in with the younger riders to keep the pace right. There was a big range in the skills of our paraders and we wanted everyone to have fun. A couple of shy riders got into the box or onto the tandem right off the bat so that they would not worry about riding at all. 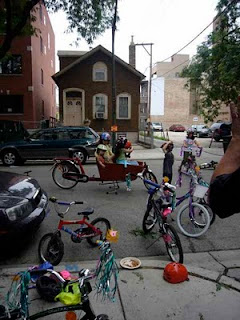 We rode down our street and then up onto the sidewalk to the campus, where we rode in a big circle and looped around many times before turning home. Tired paraders got hoisted into the box or tandem or we just slowed the parade a bit to pace everyone to get back home.
Parents silly enough to get on one of our trash bikes - rescued and refurbished zombie bikes that live in our garage - helped keep the ride moving, and some wrapped themselves in crepe paper to do it. One had the loud portable radio. Other parents relaxed at our house, talking out front.
When we got back, we pulled all the bikes up on the sidewalk and cut the cake. All the guests and any neighbors that happened to be out visiting got some.
Then it was time for everyone to pack up and go. We heard some kids even fell asleep on the way home.

It was wheely fun. 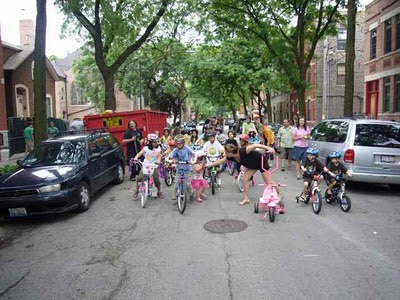 Our tips for making a bike fest work:


Check with a bike store to see if you can get streamers or bells or something silly in bulk- we had a good experience with Irv's in Pilsen. Just winding crepe paper was fun. Don't forget the plastic plate spoke buzzer motors.
Try to make sure everyone has had a little food before the parade.
Tote a loud radio with fun music.
Know which kids are less confident riders and keep the pace light. It should be fun for everyone and faster riders will just have fun rolling with all those other kids all decorated up. We went in circles so people could go at their own pace but never get  left behind.
It's handy to have a sag wagon or other option for tired riders. You don't need a cargo bike - a trailer to sit in, or a scooter to borrow while a parent carries the child's bike might do just as well.
Don't ride all those kids in the unblocked street - it's not Kidical Mass. We had parents watching the intersections and keeping everyone going but we had a huge pack of kids and only a few parents, so we stayed on the sidewalk until we got to the campus.
This is also a good party to just have in a nearby park. No traffic to watch at all then.