To Chinatown by Bike to Welcome Year of the Dragon 4710 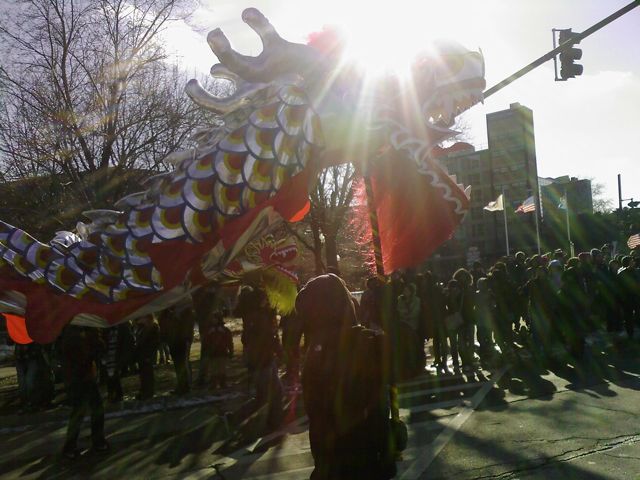 (Edited post with pictures of the celebration)
One of our favorite annual celebrations happened this weekend in Chinatown to welcome the Lunar Chinese New Year 4710. The Lunar New Year party always includes copious fireworks, an incredible Dragon dance and parade with marching bands and plenty of delicious food.  2012 is an extremely special celebration for Chicago's Chinatown. This Dragon year is a time of prosperity and power in traditional Chinese culture, and it's the Chicago Chinatown Centennial too, marking a hundred years of Chinese culture and community in Chicago from 1912-2012. It's actually been 4710 for almost a week already but the celebration was this weekend. The parade started at 1:00 on Sunday and other programs started at 11:30.

Here are our favorite tips for riding to Chinatown and enjoying the afternoon with children in tow. There are also some food and bike route suggestions that are good all year at the end. If you are going in summer look at our post about the water taxi from Michigan Avenue. If you have your own favorite tips or suggestions please add a comment - this isn't a complete list by far!

For the New Year celebrations:

Our food suggestions:
Other suggestions:
The dragon parade with its marching bands and homemade floats is the big draw for most people, of course, but later in the afternoon the dragons come through the commercial district and dance in front of and inside businesses to bring luck to the new year.

There were three or four of them, with a dragon zookeeper with a long pike to keep the crowds safe. Businesses offer lettuce and oranges hung with a red ribbon above the door and a dragon leaps up and snatches the treat. Fireworks accompany the lucky dancing animals. 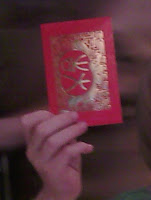 Older people give younger ones decorated red envelopes with money inside for the New Year - don't look until you get home!

There are a few good ways to get to Chinatown:

Since the 18th street protected bike lane has been put in, coming from Pilsen or South Loop you can just take it and then Wentworth south into the heart of the commercial section. Take the sidewalk over the bridge since they haven't installed metal plates there yet.

Coming from the west loop we might ride on Peoria to UIC then Morgan then east across the Cermak bridge to avoid Halsted, though that does connect too. There's also a nicer connection from Morgan and 18th down on Sangamon all the way to Cermak but you'll have to look at our map. We took the sidewalk on Cermak to Chinatown since the bike lanes are full of ice.

The Red Line El comes right in to Chinatown if it's really cold or otherwise no fun to ride bikes with the kids. You can also take the Blue Line to UIC-Halsted where there is a long ramp for your bikes on the Morgan St exit, then through UIC and Morgan as above.

Don't think about driving to the New Year parade. Park and take your bike or the El.

As the Chicago Chinatown Chamber of Commerce says, GUNG HEI FAT CHOI TO ALL!
at 6:07 PM

Labels: Getting places, Places in Chicago to go with kids, Places we Ride