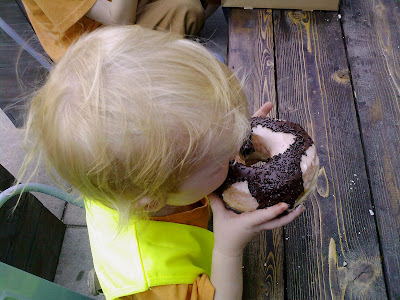 We rode across town and down the new protected bike lane from the Jewel at Kinzie and Desplaines to the famous famous Doughnut Vault on Franklin and Kinzie. That's a 5 inch wide $3 chocolate glazed in the picture.  You can also get three smallish sugar and cinnamon (gingerbread stack) donuts for $2, and the coffee is good, with little bits of fine grounds at the end of the cup. The whole neighborhood smells of chocolate from the Blommer's factory.

There was a line but it took only 15 minutes from the corner and the kids were excited with doughnutty anticipation. They sell doughnuts from 8:30 M-F and from 9:30 on Saturday, closed on Sunday, and they close when they sell out.  They tweet when they are running out apparently. Cash only.  ("No doughnuts for you!")

A few people were parked in the bike lane, and the signage will take getting used to (drivers were confused and one tried to pull into the lane with us in it), but the Kinzie bike lane is a huge improvement and our kids seemed much safer in it than on the road or sidewalk elsewhere in town. They rode the sidewalk over the slippery bridge though. We continued on Kinzie to the west as we left. Pictures: