The way from here to a future Chicago with enough bike oomph to be on the map of cycling cities seems a long way off on a knuckle-cracking cold day in January. 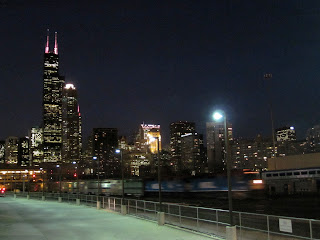 Staying on a bike in the winter for me isn’t so much about the cold as the extra work it can take to stay on two wheels with three small people and a city of raging traffic. My oldest son is growing up through the bike box cover with his helmet on. It’s pretty cramped if anyone is in a cranky mood. On went the cover this week and many-brother mayhem ensued. Morning grumps felt packed like sardines. Insults and punches were flying.
The winter ninja riders in all over basic black and Bern got to hear me threatening everyone at the lights (before ninjaing on through the red).
You might wonder what that has to do with anything, but I know that the fact that my son is able but unsafe riding on his own to school is a growing pain for me and for Chicago. In any EU bike nirvana he and the middle guy would be rolling under their own power on a cycletrack, heeding the bike stoplights and eating butter pretzels on their way to school. Perfect expat photo fodder for Amsterdamize, Copenhagenize or Heidelbergeirung to taunt me.
Bakfiets en Meer recently posted a pic of a crowd of boys mugging for the camera on a blissfully empty Dutch bike path. I wanted to photoshop in a nice lane eating CTA bus, nefarious taxis and a few crazed car commuters just to spice things up a little for those guys. I’d even add a couple of wacky jaywalking pedestrians here and there. Sound familiar? As inspiring as the Ize sites are, I sure wish they came with an owners manual for building the great cycling society. It looks like we are going to have to do it without a map. The ThinkBike workshops and the Bike 2015 Plan left us some clues but we need more.
A few hardy Chicago family-toting (kids and/or dog) polestars — Jane Healy of Active Trans, Kathy Schubert of Cycling Sisters, and Gin Kilgore of Bike Winter and Break the Gridlock — keep me from crying into my coffee. They ride everywhere with their kids and make the city a better place for me to ride. The most I’ve done in ten years besides riding around Chicago is stumble into one or two of the Mayor’ s bike meetings and keep my CBF/Active Trans membership up to date. Not much to hang a hat on but this year could be different. Herewith in their spirit my four pronged plan.
I’d like to learn more about CMAP — The Chicago Metropolitan Planning Commission — and their committee on bikes and pedestrians. Their blog is Soles and Spokes for news on planning, projects and grants in the Chicago Metropolitan Area Planning District.
I want to go with my family to the National Bike Summit in March. The League of American Bicyclists is hosting it in Washington D.C.. Check their site for news on the Summit and why funding for cycling and pedestrian projects is due for radical cuts under the new Congress. They estimate needing at least a thousand cycling advocates this year to flood the Capitol and influence transportation policy.
I need to make my vote count. Chicago’s new mayor will have a seismic influence on anyone out there that rides, walks or trains it here in Chicago. Many aldermen are also defending their seats. I need a way to find out which of my aldermanic candidates and who of the people running for Mayor will make this the decade Chicago meets its promise. One new organization formed around the election is Walk Bike Transit. WBT is a PAC — political action committee — that can advocate with money and time for purely political change. They are a natural partner to Active Trans, who is always working to benefit pedestrians and bikers, but not allowed to lobby or spend money in political races to influence outcomes.
I want to get schooled by Streetsblog. It shows how brutally organized, hard nosed cycling advocacy gets done in New York, DC and SF. Their daily sidebar of every cycling related civic meeting in New York is amazing. It can flood a civic meeting with hundreds of cycling advocates. I wish Chicago was on Streetsblog with that little sidebar box too. Imagine what we could get done. (more about them here)
Got any other good ideas? If you see something missing here feel free to add it, please!
at 11:28 PM