Ride your kids to movies in the park this summer - ET is tonight, Tuesday

The Park District will be showing E.T.: The Extra-Terrestrial, the 1981 Spielberg movie, at Fulton River Park on Tuesday the 12th at dusk. Why, you might wonder, would I mention it at all? It's just that E.T. is the greatest kid bike power film ever. (The perfect antidote to ten-year-old bike malaise -- our guys just watched it for the first time.) I had completely forgotten about the bikes! The guys were flabbergasted by the bike gang and how they got everywhere together on those banana seats. 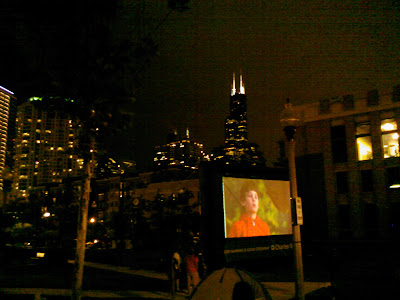 It just so happens that Fulton River Park is the little park right next to the new Kinzie  bike lane! I promise I'll stop writing about the lane but I can't help pointing out that this would be great in any park and especially in this one. Meet the Parents and The Princess and the Frog will be at Fulton River park later in the summer but as far as I know they have nothing to do with bikes.


This is great summer bike family entertainment. A free movie outside in the park on a giant screen (with a limited supply of free park district popcorn sold by a popcorn, er, pedaler). We suggest packing your bike with water/drinks, popcorn or a picnic of your own, and a good blanket to sit on. Bug repellent might be handy.  People sometimes bring little folding chairs too.
They will also be showing E.T. in Mann Park at 3035 E 130 St on July 20, and at Harold Washington Park, 5200 S Hyde Park Blvd, on Sat Aug 13.

For a complete PDF list of planned movies on the Park District web site, click here. Too bad we already missed Breaking Away on June 16. The list also has the number for each park in case you need to phooone hooome.
Our favorite Super Playground park, now named after Mary Bartelme, also has a couple of movies this summer. In fact, LOTS of parks have movies, including a park near you. Pump up your tires, raise your kids' bike seats, and go!
at 12:51 AM