From Sidewalks to Streets 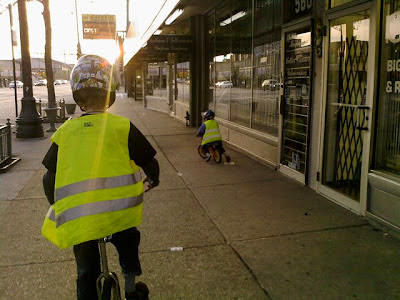 To learn to ride the street or take the sidewalk? Which is best for your kid in the city?  If you are like many parents we know who ride in Chicago it's usually a little bit of both — even on one ride.  Vehicular cycling advocates (and many traffic laws) say that bikes are just like cars and cyclists should always take the lane just like a car, but that logic (if it even makes sense for anyone) really falls apart when the cyclist is 3 years old on a balance bike. Sometimes the road makes sense, sometimes it doesn't.


We hear two questions most often when asked about sidewalks and streets:

"If I'm the grown up should I ride on the sidewalk with my kids, or follow them in the street?"

Usually we trail our smallest kids from the street, if they are on the sidewalk. Unfortunately, although this is the legal way to do it in many places including Chicago, this can be nerve wracking as you monitor your swerving young rider from afar, shout, and try to pay attention to your own traffic so you won't get hit yourself. We often get up onto deserted sidewalks to ride along, especially when crossing bridges (with their child-tempting views of water and non-childproofed girder fencing).

In many cases, then, depending on the location, walk/riding your bike behind your child on the sidewalk might be the safest solution for everyone. You'd be surprised how many sidewalks in the city are empty most of the day and we feel perfectly fine taking advantage of them. Of course, we are going at kid speed, roughly walking speed in most cases, and the pedestrians always have the right of way. We pull aside to let them by if there is any question. We stop at the alleys and most driveways as if they were real streets.

If the smaller ones of us aren't riding their own bikes, we ride like normal grownups in the street most of the time.

"If we are riding on the street, should I be in front of my kid or behind?" 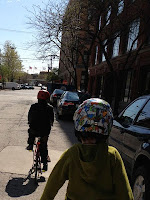 We always put our kids about 10 feet/3 meters in front of us and a little to the right when we ride on the street. We can watch them as they go, anticipate traffic coming from behind, help avoid bothering pedestrians in the sidewalk, and check in on how close to cars they are riding, to avoid the door zone. A kid behind you could be exposed to dangerous traffic you don't see. With your children in front you can much more easily talk to them encouragingly to keep them concentrating on the work of riding safely. 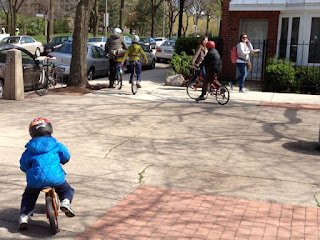 The question we don't hear so much is "How do you move safely between the sidewalk and street?"

It's another really important thing to pay attention to as your kids take turns and make crossings, though we don't hear as many questions about it.  This is the most dangerous part of sidewalk use for everyone. Crossings are the site of many pedestrian and bike traffic accidents.

As we have said before, like nobody expects the Spanish inquisition, no driver in Chicago imagines a child out on a bike, ever. Also, kids on bikes are short and hard to see, even if they have a flag.  We tell our guys to remember that they are really invisible when we are out on bikes — but they have the power to stay safe and take good care of themselves too.

Taking a little time out to teach your new biking kids to use crossings well and to move from or to the sidewalk to the street thoughtfully can reap huge safety benefits. Plus it can be really fun.

We like to start off by pretending to stop and get off the sidewalk at "intersections" in a relaxed car free place like a park or at a university campus, and then we move on to slow careful coaching at real intersections. The pretending can be extra fun if you put a toy traffic cone, bandanna or something at the edge of a little sidewalk intersection and make it a game to stop before the object on the ground.  We don't encourage a fast crazy stop but rather a mellow, slow approach. You can "race" to see who can be the slowest stopper at the toy. Last kid wins.

With all the pretend intersection stops and starts at UIC and the park, our kids (hopefully!) won't roll into the street without a complete stop.  Our guys are coached to try to stop way before the edge of the street — maybe 6 feet/2 meters, so they really will be able to stop without drifting into traffic and so drivers don't think they are going to keep moving.


Once we are confident our wobbly riders are solid stoppers, we look for a quiet intersection in a residential area and take to the sidewalk. Out on the real street kids can observe how cars move and understand how small riders are hidden from traffic by parked cars and other vehicles. For example, drivers in cars turning left will often not see a child on a bike on the corner who is hidden by parked cars or by traffic moving the opposite way on the street. Drivers of cars turning either direction do not anticipate us moving off the sidewalk and into the road, and can also easily hit us.

We encourage the kids to stay stopped on the sidewalk until they have checked out the traffic and looked around to see where the stop signs are.


Before they cross we ask them to make eye contact with every single driver at the intersection so they know that everyone is anticipating their move into the street. This is important because sometimes one driver will stop, wave them across, and other drivers whiz by or keep going. Even if there is a walk sign we encourage the guys to wait sometimes for the next one so that they can check out the traffic —  car drivers are not expecting them to move right across and may not see them right away. Waiting for a fresh light gives them a chance to scope out the intersection and make a good choice about getting across.

Many times our kids will get off their bikes and walk across, especially if we have a tired kid who is struggling with the bike a bit.


We do a lot of crossing practice together, asking questions about how they think the cars might move, watching traffic to see how the lights change and how cars make turns from the point of view of trying to get across.  (This doesn't mean our small people always make perfect choices at crossings, of course — be ready to grab somebody if they make a bad choice!)
If our kids want to move from sidewalk to street between intersections we encourage them basically not to. Ever. Coming out between parked cars into the street in Chicago is very risky and we try to teach them to stick it out and head to the corner unless there is a closed off sidewalk or construction to contend with.


So is it better to ride on the street with your kid? Ride on the sidewalk? We think you should do what you think makes the most sense. It really isn't either or. You probably have a gut feeling what you want to do and it is usually right. (p.s. if you think you are the first parent to ride the sidewalk, bike loaded with your kid, following another child along ...you definitely aren't!) If it's safe, take the street, and if it isn't, on to the sidewalk.
Just keep riding!
at 5:34 PM

Labels: Teaching Kids To Be Safe On Their Own Bikes