We had quite a time on the Critical Mass tonight, stretching from the Loop through Boystown and on to Uptown, down Argyle and up Sheridan on a terrific route with lots of new and old friends. Even our neighbors downstairs took the ride. The air was just warm enough and we had a surfeit of snacks and chocolate to keep everyone chipper even though they weren't on their own bikes. Argyle was tempting us with a late, after Mass, Vietnamese supper as we passed along. 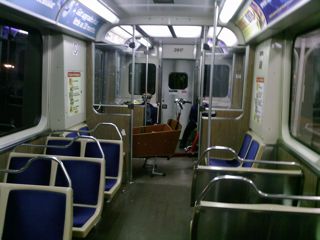 Unfortunately, at Hollywood and Kenmore, ten and a half miles from home, the sprocket sprang off the rebuilt Nexus 8 hub we keep whining about, then the roller brakes failed on that wheel. Both of these things have happened before. Perfect timing. I took the bike apart as best as I could with an adjustable wrench on the sidewalk, but I couldn't get to the
sprocket retaining ring to reseat it, so there we were. Five of us, two full panniers, a working box bike, and a useless tandemtransporter. You could pedal as much as you liked but the bike wouldn't go; you could hit the back brakes as hard as you could and the wheel would just buzz as the splines wore down. We'd had a  beautiful ride and our oldest was in tears watching the Mass glide by and around the final corners. We waved friends on because we had plenty of tools on board. The bikes melted away and soon it was just us and lots of cars rushing by on Hollywood. It was after 8 pm - all the bike stores were closed or far away.

So how do you get home in Chicago with two giant bikes that won't fit on a bus or in a taxi, no kid seats for a taxi, no tow rope...?  Hmm. Stick together or not ? Walk? Lock the bike up in an unfamiliar neighborhood, one parent and all the kids ride home in the box bike and the other grownup rides on the El, bus or taxi?  Stand on the pedal and scoot with the other foot for 10 miles? Hold hands and hope the one pedaling can move everyone?

We decided we didn't want to split up and that we were too afraid of the dreaded angle grinder to leave anything behind. Loyola and Granville red line stations have elevators. With a little bit of experimenting and a very surprised but forgiving station attendant we figured out our bikes will just almost fit inside (if you lift them up with the front wheel up in a top rear corner and the back wheel in a lower front corner, one bike at a time). After bluffing our way onto the train (and paying of course) with both bikes and all three kids we were off!  We had a fast night ride through the city with just enough time to figure out how to get everyone and everything off. Here we are on the train: 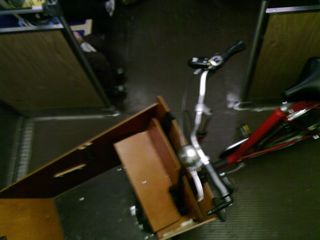 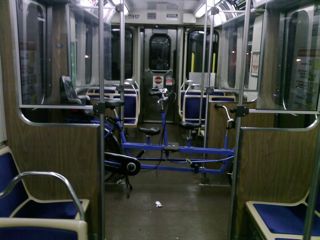 After we stopped by Wrigley Field some home going baseball fans were boggled by the sight of our bikes on the train -- the bikes were weird enough for them. Slowly more people got on and gawked at our bikes. We did a quick switcheroo at Lake where we got both bikes tucked in next to one door so we were ready to have one grownup pull the bikes off the train while the other wrangled small people- our goal of course to get off with everything and every kid we got on with. The guys were just warming up to the fun of it all at this point. They watched the city blurring by as we all put our heads together to figure out how to get back off the train. We split the jobs up- kids to one grownup, bikes to the other. The kids took control of the bags- putting them into the box bike and we all wore our helmets so we didn't have to carry them off.

The train approached our station and, with a big help from a lady holding the door open but unintentionally blocking the box bike, disembarked with both bikes and all three kids in one piece. We got in and out of two more elevators and burst out onto the street to begin our sweet but drizzly two mile walk home under the skyscrapers.

Don't try this if you have any other choice - the El will carry a box bike or a tandem in a pinch but getting it up to the platform and back to street level was not simple at all.  People traveling in the same train car may be unhappy about the blockage if the train isn't as empty as in these pics (which it soon wasn't). The Bakfiets is the maximum size I think you could get into the elevators we used tonight, and that involved actually lifting the whole thing off the floor and putting the front wheel near the ceiling and the back wheel near the door. Remember sometimes on El elevators you get on one side and get out another, so you have to twist the bike without getting squashed and get it out the door before it closes.

As for the Shimano Nexus 8 speed hub, this is the one that failed before, then Shimano sent 8R25 guts to build into the 8R20 housing. It just hasn't worked well at all since it first broke. While it may be possible in other places where these parts are very common to get a hub rebuilt and functioning again, I fear that the thing to do here is just buy a fresh new one if the guts are wrecked and hope the new one won't fail too.  (You can build your new wheel with any hub, of course.) Maybe if we fill it with super glue we can make it into a  tandemtransporter fixie.  Watch for my upcoming post on how to do that and be a true hipster who's carrying kids.

Update - Dutch Bike was able to sell me a replacement wheel today to keep everything running while the other one gets repaired. Maybe I can fit the old one on another bike?...
at 1:11 AM